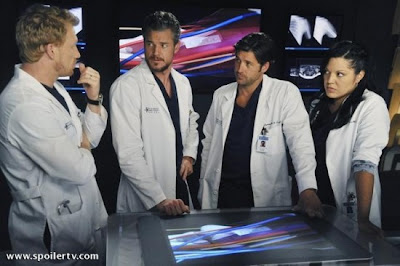 When I first heard that Grey’s Anatomy was doing a documentary-style episode that would take place six months after the hospital suffered a horrendous shooting in last season’s finale, I was less than excited. Although the first four seasons of the show were medical drama at its finest I have found this season to be either too dull or so unnecessarily graphic that I’ve almost lost my dinner more than once. There was a time that I couldn’t wait to find out what happened next on Grey’s but recently that has not been the case so it’s no surprise that it took me so long to watch this episode – it aired two weeks ago but I just got around to watching it on DVR. That being said, this episode reminded me why this show is so good as it was gripping, at times tough to watch and inspirational all in 45 minutes.

While all the major characters were interviewed by the “film crew” throughout the episode, there were a few that stood out. Callie, Derek and Mark worked on giving a patient new arms, Alex Karev literally grew a new trachea for a little girl, Bailey performed a surgery on a patient who was in the hospital the day of the shooting and Arizona was offered a grant that would require her moving to Africa. All these situations were very intense but they flowed seamlessly in this episode. Everyone was on their game both as actors and “doctors,” making the show so exciting that it was hard to look away.

I know that I’m not spoiling anything because this episode aired a while ago so here’s how it all turned out: Callie, Derek and Mark successfully attached the donor arms on their patient which was no small miracle. One of the donor’s arms had a tattoo that said “Nicole” for his wife (an extraordinary woman who also part of the documentary) and once the procedure was over and the man began healing the documentary told us that man tattooed “Thank you” above the name Nicole. While Karev grew the new trachea he slept in the room with his patient because her mother lived too far away and couldn’t afford to visit every day. We learn through the documentary that he not only saved the little girl’s life but also was a guest speaker in her class at school. Bailey’s patient never woke up from her routine procedure which was no question the most heartbreaking part of the episode. We later see the woman’s husband having to make the call to unhook her from life support. Arizona took the grant in Africa and Callie said she was going with her. Does that mean they are both leaving the show? We’ll see….but I think the idea of both of them leaving the show is doubtful.

Although Meredith and Christina had the most “on air” documentary time neither of them had big parts in the medical portions of the program. The two of them mostly talked about what it was like for Meredith to see her husband shot and for Christina to heroically save his life while at gun point. Christina, who has been hit the hardest after the shooting, ends the episode with a stoic and intense last line: “Sometimes being a hero has its price.”