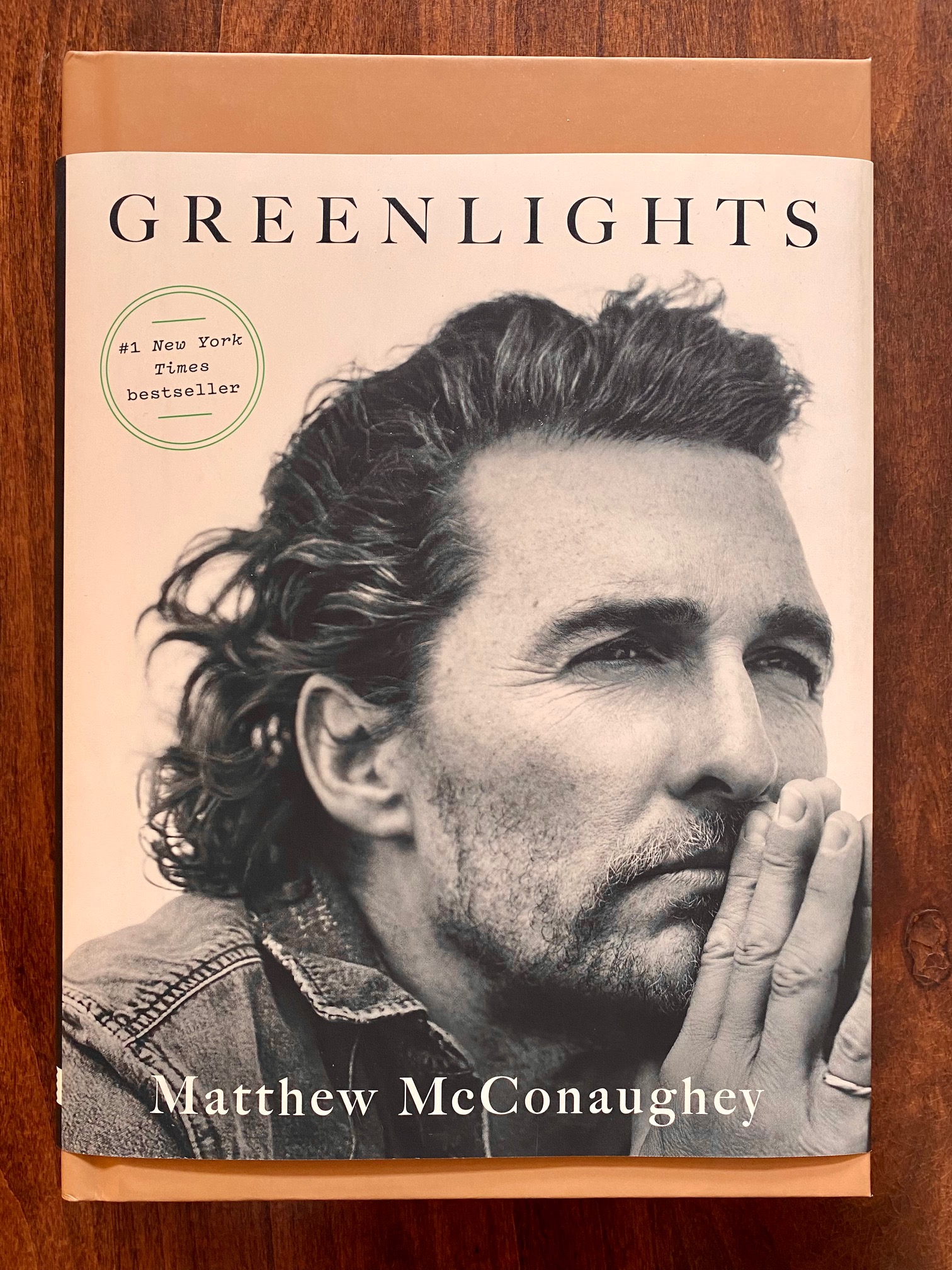 I get why Matthew McConaughey’s book Greenlights is a New York Times bestseller. It’s raw, real, and approaches the conventional celebrity memoir in a different way. In fact, the first line of the book states: “This is not a traditional memoir.” On that same page, McConaughey makes it clear what this book is meant to be and what it’s not: “This is not an advice book…This is an approach book. This is a playbook.” While those statements did get my attention, they are also very dramatic. I assume that’s the point – especially since McConaughey didn’t get to where he is today by being conventional.

His parents are/were “characters” who could be described as old school but also a little gnarly/borderline abusive. I learned in Melissa Maerz’s Alright, Alright, Alright book that McConaughey’s dad passed away while he was filming his first movie (Dazed and Confused) so I was hoping that Greenlights wouldn’t be too repetitive for me and it wasn’t. In this book I learned that his mother – bless her heart – encouraged him to plagiarize as a kid and took advantage of his fame when he was in his twenties. He clearly has a lot of love, respect, and pride for both parents but wow they are unusual personalities.

Another reason I hesitated to read this book (besides the repetition) is because sometimes I find McConaughey to be brilliant (i.e. Dazed and Confused, Lincoln Lawyer, True Detective) and other times I find him annoying. But he is an excellent storyteller – something we learn that a friend of his told him when he was in his twenties.

Throughout the book we get a sense of McConaughey’s outlook on life as a hardworking kid from Texas, a dreamer, and someone who remains hungry for adventure – all of which positive and negatively contribute to his story. He walks the line of the “advice book” he was trying to avoid but also makes the reader want to know more.

The movies he has made (and are known for) are an afterthought. He mentions them – and points out how he was the go-to romantic comedy guy until he wanted more roles with teeth – but they are a minor part of this story. The three roles he spends time describing are his characters in Dazed and Confused, Dallas Buyers Club, and True Detective. I expected there to be information on Dallas since that role – as gnarly as it was – earned him an Oscar for Best Actor. But what he spends the most time on his talking about family – his parents and brothers initially and later his wife and children which of course I love. He states many times that he always wanted to be a father and it sounds like it’s his most rewarding role yet. Clearly he has learned a lot from his kids.

He also talks a lot of about restlessness and self-loathing regarding his success which leads to many bizarre journeys throughout his life. And those stories are definitely not my favorite aspects of the book. That being said, McConaughey is definitely a storyteller and I always appreciate that. So here is what works, what sort of works, and what doesn’t work:

What sort of works:

“Consequences, they work both ways.”

On his mother: “Nobody forgives themselves quicker than she does and therefore she carries zero stress.”

On his father: “A bear of a man with a soft spot for the underdog and the helpless, he had a rowdy wit about the world and himself.”

“We need discipline, guidelines, context, and responsibility early in any new endeavor.”

“Fascinated with the differences between people and cultures, I’ve always enjoyed looking for and finding the common denominator of values that are the foundation beneath our instincts.”

“It left an engraved impression on my heart.”

“Honest first impressions were a thing of the past. That check had been cashed.”

“One of the originators of outlaw logic, he’d rather shoot the lock than use a key any day.”

“Localize to customize. Adapt to modify. The Renaissance man is at home wherever he goes.”

“Eager to dance with my devils instead of fight them, I was keen to negotiate the abyss, broker a deal with lack of restraint, and see if I could come out the other side unscathed.”

“Just because it says anonymous doesn’t mean it has no author.”

“Sometimes which choice you make is not as important as making a choice and committing to it.”

“Life. Like architecture. Is a verb. If designed well. It works. It’s beautiful. And it needs no directions. It needs maintenance.”

“When two people who are meant to be together unite, the adventure of livin [yes this is how he writes this word throughout the book] side by side does not steal the individual’s sense of self, rather it enlightens and informs it.”

His brother Pat taught McConaughey forgiveness which is why he refers to him as his lucky charm.