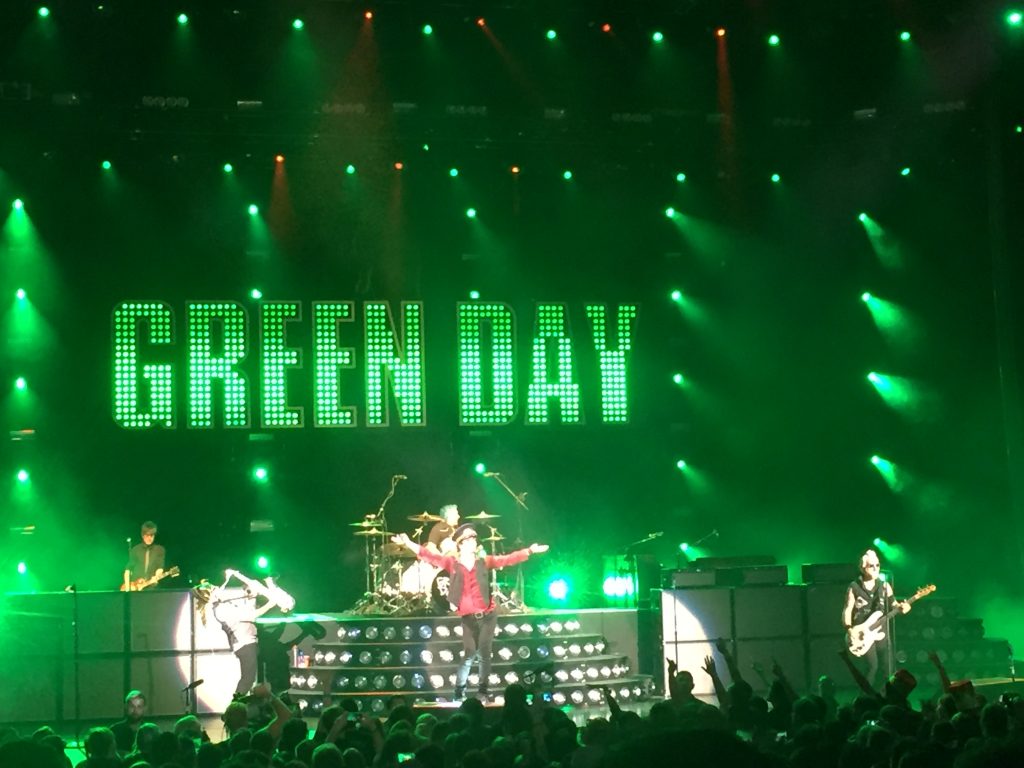 No – Green Day and David Spade didn’t perform together (although that would have been cool) and have nothing to do with each other, but I did see both shows within 48 hours so they get a combo post! One aspect they do have in common is that Billie Joe Armstrong (along with Mike Dirnt and Tre Cool) and David Spade are pros. I’ve been a fan of the band and the comedian for 20 years and seeing them live did not disappoint.

Green Day: Although the band has existed since 1986, I became a fan in 1994 when they released Dookie which included hits like “Longview,” “Welcome to Paradise,” “Basket Case,” and “When I Come Around.” I remember being attracted to the fact that all that noise came from just three people – also the video for “Basket Case” was all over MTV. Every album they’ve released since then has featured songs I enjoy and, of course,  I was impressed when American Idiot became a Broadway musical! Punk rock on Broadway? It was a foreign concept before Hamilton brought hip hop to the stage.

Anyway, Green Day continues to have an amazing ability to bring California punk rock to the masses and that’s exactly what I witnessed in Denver last week. Sold out to 18,000 fans of all ages at Fiddler’s Green Amphitheatre, Green Day lit up the stage – literally and figuratively. The pyrotechnics were something to see and I’m happy to report that, three decades later, Armstrong’s voice is on point. There were even a few instances where went a Capella and it was fantastic. What was interesting is how much Armstrong loves his audience. I mean it was just one audience roll call after another: “That’s how we do it in Colorado!” “Colorado how are you feeling?” “Let’s rock out Colorado!” At one point, he looked over to the promotional Subaru parked to the left of the stage and decided to go over there and smack it repeatedly with his guitar. He also brought a teenage girl on stage to sing and an 11-year-old kid to play guitar – ballsy moves for sure but he definitely gave those kids memories they will be talking about when they’re my age!

While their new album Revolution Radio is excellent, I’m glad that the band wisely chose to play a lot of the old bangers that people wanted to hear, as well as a few acoustic songs including“Good Riddance (Time of Your Life)” which arguably is the track that brought Green Day to the masses. Overall the band’s longevity is impressive considering they have released twelve studio albums and have remained relevant with their most recent album debuting at number one on the Billboard 200. Throughout their career, Green Day has sold more than 85 million records worldwide and won five Grammy Awards, and the stage adaptation of their music was nominated for three Tony Awards. In April 2015, the band was inducted into the Rock and Roll Hall of Fame in their first year of eligibility.

Side note: I recently learned that 1991’s Kerplunk was actually their second album (their debut 39/Smooth was released in 1990) and “Welcome to Paradise” was originally on Kerplunk.

David Spade: My favorite part of any comedian’s standup routine is when they talk about the city they are in because clearly that is a part of the show that is different from all the others. Usually when an act comes to Colorado, there is discussion about the legalization of marijuana but David Spade didn’t really talk about that. Instead he pointed out how Beaver Creek is one of the wealthier places he’s ever visited other than Aspen and, after eliciting a groan from the audience, compared Beaver Creek and Aspen people to the Crips and the Bloods. Accurate. Vail Valley people think Aspen people are snobby and Aspen people think the resorts at Beaver Creek and Vail are subpar. But the funniest part of his routine, without a doubt, was when he called out the Vilar Performing Arts Center. He couldn’t believe that such a fancy venue still had a microphone with a cord. It was hysterical seeing all the proverbial lightbulbs go off over people’s heads – why doesn’t this beautiful performing arts center have a cordless mic? Is this for real? We immediately decided that the next show would definitely have one. No one likes being called out by David Spade – especially in front of a bunch of donors. MIC DROP. 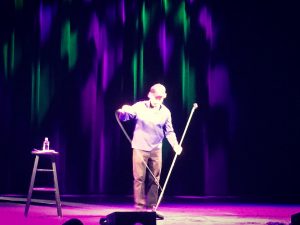 While the two comedians who opened for Spade were funny, it was so clear that Spade is a pro which makes sense since he has been in the business for over three decades. He started out on Saturday Night Live and then became a successful actor in both film in television. My earliest memories of Spade include his movies with Chris Farley – I don’t know how many times I’ve watched and subsequently quoted Tommy Boy and Black Sheep. He was also part of two long-running sitcoms, Just Shoot Me! And Rules of Engagement, the former of which earned him an Emmy nomination and two Golden Globe nominations.

Casually clad in jeans, a fleece jacket, and a Bass Pro Shops hat, Spade was laid-back and funny and his entire routine flowed. As he talked I almost felt like I knew him – maybe from so many years of seeing his face on television or maybe because he’s aged pretty well. At 53 years old, he looked good and didn’t sound pathetic talking about picking up women!

Side note: I just learned that Spade is a dad! He has a nine-year-old daughter named Harper and her mother is former Playboy model Jillian Grace who is 31 years old.

As my summer of live shows came to an end last week, I’m happy to report that everyone I saw brought their A-game. I’m glad Green Day are still making great music and I’m glad Spade is still making people laugh. Thank you to Colorado for an exciting summer of entertainment.