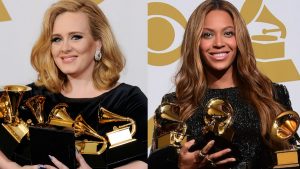 It’s finally happening! Adele and Beyoncé released extremely popular albums that are both eligible for Grammys during the same year! While Adele’s 25 and Beyoncé’s Lemonade are very different – the former shows off powerful vocals through soaring ballads and the latter is an explosive barnburner that holds nothing back – both these albums are incredibly executed masterpieces by two of my generation’s most influential voices. Both records are also extremely well-written, showing that lyrics matter and artists who have something to say get multiple Grammy nominations.

Announced earlier this month, Beyoncé earned nine Grammy nominations and Adele earned five – but four of those nominations pit the hardest working female voices in music against one another in important categories:

Record of the Year

Album of the Year

Although there are some solid competitors for Adele and Beyoncé, as Rihanna, Sturgill Simpson, Ariana Grande, Drake, and nutjob Kanye West each had a big year, I’m thinking that Beyoncé will win every category she’s nominated in that Adele isn’t and Adele will win Best Pop Vocal Album.

Here are the categories that the diva powerhouses are nominated in but not competing against each other for:

According to the numbers, Beyoncé has a bit of an edge on Adele. That being said, Beyoncé has also been in the game longer than Adele and has released more albums over the years:

Total Grammys: Adele has 10 (from two studio albums) and Beyoncé has 20 (from six studio albums). Depending on how many Grammys Beyoncé wins in 2017, she could become the most decorated female artist and the second most decorated artist ever (conductor Georg Solti has her beat for now).

Album sales: As of July, more than 1.4 million copies of 25 were sold compared to 1.2 million copies of Lemonade. That being said, Adele released her album in November 2015 and Beyoncé’s record debuted in April.

Both women deserve recognition (and they are clearly both used to winning) so the question remains: Do the powers that be at the Grammys prefer the more emotional album or the more in-your-face album? Being the class acts that they are, both artists have talked about their admiration and excitement for each other. But Beyoncé has yet to win a Grammy for Album of the Year so I’m sure she has her eye on that particular prize. It will be interesting to see which diva takes home the big trophies at the 59th Annual Grammy Awards ceremony on February 12, 2017 – as far as I’m concerned the Grammy voters can’t really go wrong with either choice.