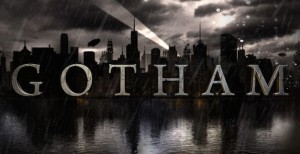 Last August the announcement that Ben Affleck would be the new Batman sent people around the world into a social media tizzy. On August 28, 2013 I wrote about how I didn’t understand what all the anger was about and why everyone was hating on Affleck – especially since in 2012 his film Argo won an Academy Award for Best Picture. Since the initial announcement things have calmed down which I’m assuming is because the movie isn’t slated for release until July 2015. Getting worked up over a movie that won’t be seen for another 14 months is ridiculous. Instead, let’s focus on a different corner of the Batman world – a TV show debuting on FOX this fall called Gotham.

Centered around James Gordon as a young officer on the Gotham City Police Force, the show serves as a prequel to Batman. Played by Ben McKenzie, (a favorite of mine from The O.C. and Southland), Gordon meets Wayne as a child after his parents are shot right in front of him. In addition to watching Gordon try to catch the person who murdered Wayne’s parents, we will also learn about the origin stories of several iconic Batman villains including the Penguin, the Riddler, Catwoman, Two-Face, the Joker and Poison Ivy.

While James “Jim” Gordon was played impeccably by the incomparable Gary Oldman in the films Batman Begins, The Dark Night and The Dark Night Rises, I’m excited to see what McKenzie does with the character. He played a young cop in Southland as well and I thought he did a great job. Although Oldman’s shoes are hard to fill, he played Gordon as a middle-aged man and McKenzie is playing him as a young cop – way before Gordon became a lieutenant or the Commissioner.

As someone who always enjoys learning about back stories, I’m looking forward to watching this show. Check out the trailer http://www.youtube.com/user/FoxBroadcasting?v=0d1zpt6k5OI and let me know what you think.