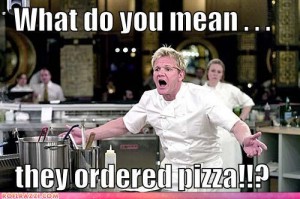 Even if you’re not a chef, have no interest in cooking or don’t even know how to turn on a grill, Gordon Ramsay is still taking over your life.  Right now, the British celebrity chef has four major shows on television including Ramsay’s Kitchen Nightmares, Hell’s Kitchen, Kitchen Nightmares and my personal favorite, MasterChef.

How the hell does a person have FOUR successful shows on television at the same time and not get on the public’s nerves?  You would think TV enthusiasts would suffer from Ramsay fatigue but instead we can’t get enough of him.  Whether he’s screaming at someone for making the worst dish in the history of (insert name of one of his shows here), helping struggling restaurants get back on their feet or telling someone to never stop cooking in such an inspirational way that they forget they are getting kicked off his show, Ramsay has a way about him that draws in viewers.

While its common knowledge that I don’t cook, I’m surrounded by people who do (Carly, Rod, Justin, Elizabeth, etc.) so I’ve been forced to pay attention to the Anthony Bourdains and Gordon Ramsays of the world.  And I’m glad for it!  Last year I saw Bourdain speak and read his book Medium Raw which was great.  I’m also a fan of his show No Reservations but I don’t think that Bourdain has the obscene number of shows and restaurants that Ramsay has.  Bourdain is definitely a successful brand (he is worth $6 million) but Ramsay has catapulted himself into a whole other universe of stardom – he is worth $118 million.  Yep, you read that right.   I don’t even know what $118 million means but I do know that you get it by working your ass off like Ramsay does.

So the question is how long will Ramsay be able to handle four television shows and over 20 restaurants around the world?  And more importantly how long will people continue to be fascinated with Ramsay?  Will they get sick of seeing his face and hearing him talk at extremely loud volumes or will the public continue to watch his every move and frequent his restaurants?  Only time will tell but for now, this non-chef is very excited to tune into MasterChef every week to see how creative the contestants can be and how quickly they turn out either culinary masterpieces or disasters.