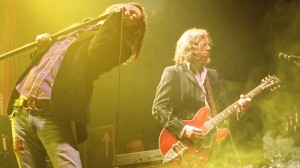 A lot happened in the rock and roll world this week – some of it positive and some of it negative. Goods news first – always:

One of the best music memoirs I’ve ever read, Mötley Crüe’s The Dirt: The Confessions of the World’s Most Notorious Rock Band, was recently picked up by a film company that currently has writer Jeff Tremaine (Jackass and Bad Grandpa) and Californication creator Tom Kapinos attached. Yeah!

It’s exciting to learn that two talented people who know what they’re doing are interested because over the last year all the Mötley Crüe news us fans have received has been announcements about the band never touring again. I like this information much better.

Now for the bad news. After 24 years, blues rockers the Black Crowes have officially broken up. Although I wish this wasn’t the case, the band’s story ends as a result of the Robinson brothers’ inability to get it together and get along. These two have taken more hiatuses than the Gallagher brothers so I’m not totally surprised, just bummed.

After seeing them live twice, it really is a shame – they are a dynamic band with songs that are as danceable as they are well-written. Over the course of their career the Black Crowes released nine studio albums, four live albums and several charting singles including “Hard to Handle,” “She Talks to Angels,” “Jealous Again” “Remedy” and “Twice As Hard.” Additionally, their electrifying cover of Otis Redding’s “Hard to Handle” and their acoustic ballad “She Talks to Angels” both achieved top 30 positions on the Billboard Hot 100.

Coincidentally, back in 1991, the Black Crowes opened for Mötley Crüe. Can you imagine what that show was like? *Sigh*