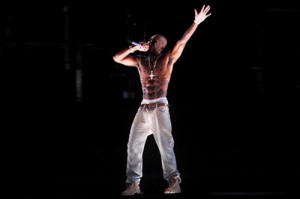 Everyone is talking about how Tupac Shakur came back to life this weekend at Coachella Fest but it wasn’t the kind of comeback anyone could have predicted. For years people have joked that Tupac and Biggie are living on some desert island and their deaths were a big conspiracy. As far as I’m concerned those conspirators need to have their heads examined because in the non-digital real world both rappers are in fact dead. But in the California desert just a few days ago Tupac made an appearance via hologram technology created by special effects production house Digital Domain that has rocked the live music industry.

No stranger to Hollywood, Digital Domain created the computer-generated imagery that transformed Brad Pitt in The Curious Case of Benjamin Button and the company’s artists also won an Academy Award for Titanic. Clearly they know what they’re doing.

In addition to Digital Domain, AV Concepts was responsible for projecting the image of Tupac on the stage and the company’s president has been quoted saying it took several months of planning and four months of studio time to create the hologram. Some have said that bringing Tupac back to life featured a price tag in the range of $100,000 to $400,000.

For those who haven’t seen the video, it’s clear that the hologram was completely digital since Tupac Version 2012 not only addressed the Coachella crowd, he also interacted with his co-performers who included Snoop Dogg and Dr. Dre. The performance was crazy, creepy, mesmerizing and surreal. There were no clips strung together, no dubbed voiceovers. It literally was Tupac remade and reincarnated in a digital format.

So why bring Tupac back? What are the repercussions? The consequences? What does this mean for the future of live music? Will Tupac Version 2012 go on tour? Will it be worth it? Will people pay extra money to see him?

And what does this mean for other deceased artists? It would be amazing to see Jimi Hendrix, Michael Jackson, Janis Joplin, John Lennon, Kurt Cobain, etc. Who wouldn’t want to see them live? But the question is whether or not people would pay for the illusion.

Also, did AV Concepts run this charade by the Shakur estate? I can’t imagine that the Michael Jackson estate would allow this without something being in it for them.

Clearly the return of Tupac raises as many questions as it opens doors. Is this the future of live music or just a one-shot deal? Technology isn’t going away but will Tupac make an encore performance? Only time will tell.