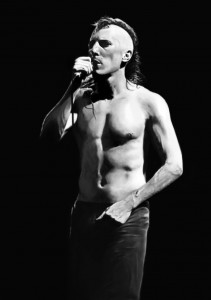 Did you know that Tool and A Perfect Circle have the same front man? If you’re a rock/metal fan you probably did. I learned this information over the weekend and couldn’t believe it. I’ve always liked A Perfect Circle but never was a huge Tool fan which doesn’t make sense since Maynard James Keenan is the lead singer for both. So I decided to do some digging on both bands and figure out why.

The band emerged with a heavy metal sound on their first studio album, Undertow (1993), and later became a dominant act in alternative metal with the release of their second album, Ænima, in 1996. Next was Lateralus (2001) and then 10,000 Days (2006), which gained he band critical acclaim and commercial success around the world.

Apparently Tool is known for having extremely talented musicians and their incorporation of visual arts which I think is what might have turned me off when MTV was still showing videos. I’ve never been a fan of what I call “screaming metal” which is when fools like Fred Durst and Doug Robb scream into the microphone and call it singing and I guess for some reason I had Tool under that same umbrella and I was wrong about that. I’ve always been a fan of metal but my kind of metal is Metallica and Black Sabbath. Maybe I had preconceived idea of what metal should sound like and Tool wasn’t it.

On to A Perfect Circle…

Formed in 1999 by guitarist Billy Howerdel and Keenan, this band has had a revolving door of members since its inception with the most notable member being former Smashing Pumpkins guitarist James Iha.

Howerdel is an interesting story because he was a former guitar technician for Nine Inch Nails, The Smashing Pumpkins, Fishbone and Tool who met Keenan in 1992 when Tool was opening for Fishbone and the two became friends. Three years later, Keenan offered Howerdel, who was looking for lodging, a room in his North Hollywood home which provided the then-tech an opportunity to play demos of his music for Keenan.

The band’s debut album, Mer de Noms (French for “Sea of Names”), was released in 2000 and is the one I know best. The album sold over 188,000 copies in its first week and appeared at number four on the Billboard 200. Fun side note: When the band hit the road headlining tours all over the world, Kennan often wore long wigs on his otherwise bald head when performing to distinguish himself from his Tool persona.

Anyway, Mer de Noms went platinum while the band was on tour and produced three singles you probably know: “Judith,” “3 Libras” and “The Hollow.” I like all three of those songs very much and specifically remember “3 Libras” being on several mix CDs I made in high school.

Although A Perfect Circle had weird videos too, for some reason, I like their sound better than Tool’s. Maybe because I consider it more alternative rock than metal and so I’m not expecting Metallica and Sabbath. Either way I find it interesting that I haven’t had a conversation about these bands in years but they both came up several times over a two-day period. Clearly Keenan, who turns 50 next spring, knows what he’s doing.