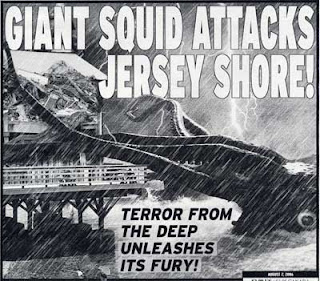 I’ve been trying to avoid writing about this in an effort to not fuel the fire but I feel as though I have no choice. Jersey Shore is taking over the world and I’m afraid….very afraid. Because someone had the brilliant idea to give these people their own show on MTV (although it should be changed to RTV since its all reality shows and because I haven’t seen an actual music video on that station since the late 1990s) these people are inescapable. Whether it’s their photos in magazines like People or US Weekly, interviews on national talk shows like The View, local news shows in Denver or trolling around Miami, these people are everywhere.

In case you’ve been living under a rock this year the people I’m referring to are Paul “DJ Pauly D” DelVecchio,Nicole “Snooki” Polizzi, Michael “The Situation” Sorrentino, Sammi “Sweetheart” Giancola, Ronnie Ortiz-Magro, Jenni “JWoww” Farley, Vinny Guadagnino and Angelina “Jolie” Pivarnick. With nicknames like that how could MTV not give them a reality show? Wow.

While all of them are known in the pop culture world a few have seemingly taken over pop culture completely. Snooki has virtually become an icon between people dressing like her for Halloween and having an entire South Park episode centered around her. (If you haven’t already, YouTube “Snooki Monster” immediately). The Situation has a book deal and is all over the place doing promotions which is shocking because I can’t believe he has time for anything in between taking his shirt off and flexing his abs. Apparently JWoww was offered a spread in Playboy but turned it down for “other opportunities.” Was she referring to her clothing line, Filthy Couture? I wonder if she was going for the “Classiest Name Ever Award” when she came up with that. My favorite Jersey Shore story was told to me today by my good friend Mo who said that the cast is banned from 90 percent of clubs on South Beach. Only two of them will allow these fools to enter which is hysterical since drinking is one of their top three daily activities other than working out and tanning.

Regardless of how annoying I think these people are the fact is that they aren’t going anywhere. They are part of the pop culture lexicon whether we like it or not. There are t-shirts and all kinds of other swag that have been made for them. They are officially a brand. And, unfortunately, America is responsible for their popularity. Why do people like watching this show? How are they so enamored by a bunch of self-proclaimed “Guidos” and “Guidettes” with horrible accents? I watched a few episodes of this show to see what all the fuss was about and it’s basically The Italian Real World. What is the big deal? I guess we’ll have some time to figure it out since they are already shooting the next season and because in a recent interview Snooki announced that they could keep doing this show for the next nine years. It’s too bad…the next generation of MTVers didn’t stand a chance.