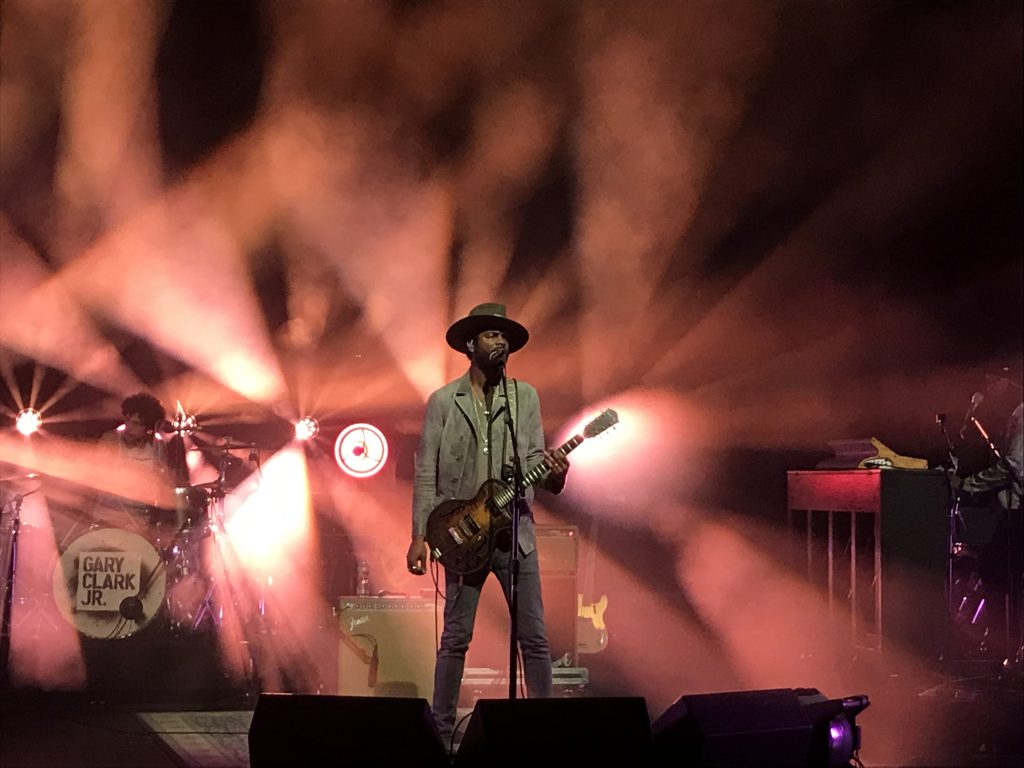 It was a night seven months in the making. Back in February, a family friend was kind enough to help us out with tickets to see guitar virtuoso Gary Clark Jr. and I was thrilled. But all those months ago, September felt eons away as I was five months pregnant and it was freezing cold outside. I was happy about having a show to look forward to that fell right between my birthday and my significant other’s birthday.

Not only was I excited to see Clark perform live, it was even better that he was playing at our local venue that is both intimate and beautiful. Gerald Ford Amphitheater provides an incredible environment and backdrop for any musician – especially one as talented and unique as Clark.

Hailing from Austin, Texas, he began playing guitar at twelve years old and could be found performing at small venues throughout his teens. When he met promoter Clifford Antone, owner of the Austin music club Antone’s, things began to change and Clark became well-known in the Austin music scene. He then played on tracks with Sheryl Crow and Alicia Keys, before being named “Best Young Gun” in Rolling Stone’s 2011 “Best of Rock” issue.

In 2012, Clark released his major label debut, Blak and Blu, which features “Ain’t Messin ’Round” and “Bright Lights,” as well as “Next Door Neighbor Blues” and a cover of Jimi Hendrix’s “Third Stone From the Sun” that more than does the track justice. Over the next few years, Clark collaborated with the Foo Fighters, Tech N9ne, Childish Gambino, Tom Morello, and ZZ Ward. He released another album, The Story of Sonny Boy Slim, in 2015 and his version of “Come Together” became his first charting single on Billboard’s Mainstream Rock chart.

But back to the September 5 show. Taking the stage close to 9 p.m., Clark grabbed the attention of all 2,500 audience members. Rail thin and completely unassuming in jeans, a button-down shirt, and a flat brimmed fedora, Clark is one of those performers who literally and figuratively lets his voice and instrument do the talking. He said very little during his two-hour set but he didn’t have to because everyone was so enthralled with his musicianship. Clearly influenced by Prince, Jimi Hendrix, and Stevie Ray Vaughan, everything Clark needs to say is communicated through his music.

On tour in support of his January 2019 album, This Land, most of his songs came from that album. Highlights are “Gotta Get Into Something,” “Feed the Babies,” and “Low Down Rolling Stone” and he played all three. Unfortunately, due to time restraints, the two songs Clark planned for the encore were cut – “Don’t Owe You A Thang” (the song that initially put Clark on my radar and is still my favorite) and his cover of “Come Together.”

While I love seeing shows at Ford Amphitheater, when I read that two of the songs I was looking forward to seeing live most were cut due to time constraints, I was extremely disappointed. Whether it was the venue or losing track of time on Clark’s part, it sucks and I hope that future audiences don’t miss out on hearing those songs. That being said, those who have the opportunity to see Clark live should definitely do it. Like Greta Van Fleet, he is a big part of the future of music. He is authentic, talented, and a true artist who clearly has something to say and should most definitely be heard.