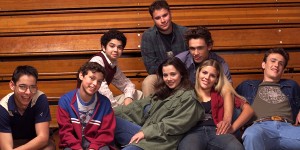 Here’s another reason to be stoked on your Netflix subscription: You can watch the one and only season of Freaks and Geeks! Created by Paul Feig with Judd Apatow (responsible for gems like The 40-Year-Old Virgin and Knocked Up) as executive producer, the show centers around two groups of kids attending high school during the 1980-1981 school year. The show is similar to Wet Hot American Summer in that its cast is a rap sheet of amazing actors and actresses before they were famous. It’s also similar to My So-Called Life in the sense that it was only on the air for one season (1999 to 2000) and it features characters who actually talk like high school kids and situations that actually happen in high school.

In addition to the superior acting and writing, this show also features so much quality music that the soundtrack almost functions as its own character. For example in one of the first few episodes, two of the main characters talk about the impact of John Bonham’s death while another talks about how he’d rather be at a Ted Nugent concert than hanging out on Halloween night. Also, the show’s theme song is Joan Jett’s “Bad Reputation.” If that’s not music perfection I don’t know what is!

Although 18 episodes were completed, the series was canceled after only 12 had aired due to low ratings which is hilarious considering, like WHAS, the show garnered a cult following that prompted fans to persuade NBC to broadcast three more episodes in July 2000. The three remaining episodes that were not previous broadcasted, aired that September on the cable network Fox Family Channel and the complete series was later released on DVD (like MSCL) and eventually became available on Netflix.

What’s also hilarious is that this one-season series is so good that it appeared on Time magazine’s 2007 “100 Greatest Shows of All Time” list, as well as placing third on the magazine’s list of greatest television shows of the 2000s. In 2008, Entertainment Weekly ranked Freaks and Geeks as the 13th-best series of the past 25 years and in 2013 TV Guide included it in its list of “The 60 Greatest Dramas of All Time” and ranked it #1 on their list of 60 shows that were “Cancelled Too Soon.”

Here is another list for you – the then-unknown actors that made Freaks and Geeks great:

Linda Cardellini, as green Army jacket-wearing Lindsay Weir, was a protagonist so cool she didn’t even know it.

Jason Segel played music fan and all-around nice guy Nick Andopolis who spent a lot of time talking about Led Zeppelin with a pair of drumsticks in his hand.

Seth Rogen was Ken Miller – part of Daniel and Nick’s posse whose humor was so sarcastic and dry you can’t help but think about his future stoner roles.

John Francis Daley started as Lindsay’s geeky younger brother Sam Weir but turned out to be cooler than anyone thought.

Martin Starr made Bill look like the biggest geek in school with huge glasses and a crooked smile that topped off his lanky frame.

Samm Levine as Neal Schweirber rounded out the geek trio in the most endearing way possible.

Now go watch and be on the lookout for other actors you might recognize. I can’t even call them cameos because no one knew who they were in 1999! Enjoy!