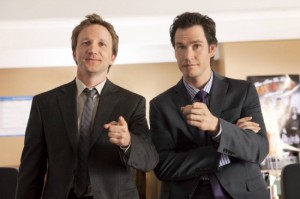 Although September through May is technically the “real” television season, summer TV has proved to be just as entertaining.  Rescue Me is a great example of pairing gritty drama and hilarious dialogue entwined with intense family and work situations.  Royal Pains is a medical show that takes place in one of the richest neighborhoods in the country but keeps it interesting with its MacGyver twists.  Two very different shows that both make me equally excited for the summer television season – and now there’s another one.

Lawyer show Franklin & Bash stars two of my favorite underused 90s actors: Mark-Paul Gosselaar (best known as Zack Morris on Saved by the Bell) and Breckin Meyer (aka Travis the skateboarding stoner from Clueless).  After watching the pilot here is what I’ve learned:

– Meyer is Jared Franklin, the arrogantly hilarious, says-whatever-is-on-his-mind, party-boy, son of a famous trial lawyer who for some reason decided not to work for his father.

– Gosselaar plays Peter Bash, Franklin’s best friend and legal partner.  He has more of an edit function than Franklin but is still always up for a party.   He also still has feelings for his ex-girlfriend and fellow lawyer Janie, who he finds out is engaged at the end of the first episode.

-Malcolm McDowell (Ari Gold’s nemesis Terrance McQuewick from Entourage) is Stanton Infeld, the unconventional senior partner of a prominent law firm who hires Franklin and Bash after witnessing their unconventional techniques in court.

Franklin and Bash are young, good looking and just arrogant and charming enough to get the attention of the powers that be in the law world.  At the same time they run their mouths like Sigma Nus at a frat party and refuse to sell out.  Recognizing their talent, McDowell brings them to his firm but of course there are people there who wish they didn’t exist.

This show is going to be fun – no question about that – and the reasons are these two 90s boys who hopefully will be remembered for this show in addition to what they did when brick cell phones and car phones were the latest technologies.  While Franklin & Bash is clearly not anything like my other favorite legal show, The Good Wife, I think it’s going to be another smart, breezy summer show that I look forward to each week.  I mean seriously, how can I possibly resist lines like these:

“I’m representing medical marijuana against the city. So if you need some samples, ding dong.”

“See that’s a talent, sounding like a total asshole even when you’re supposedly saying something sincere.”