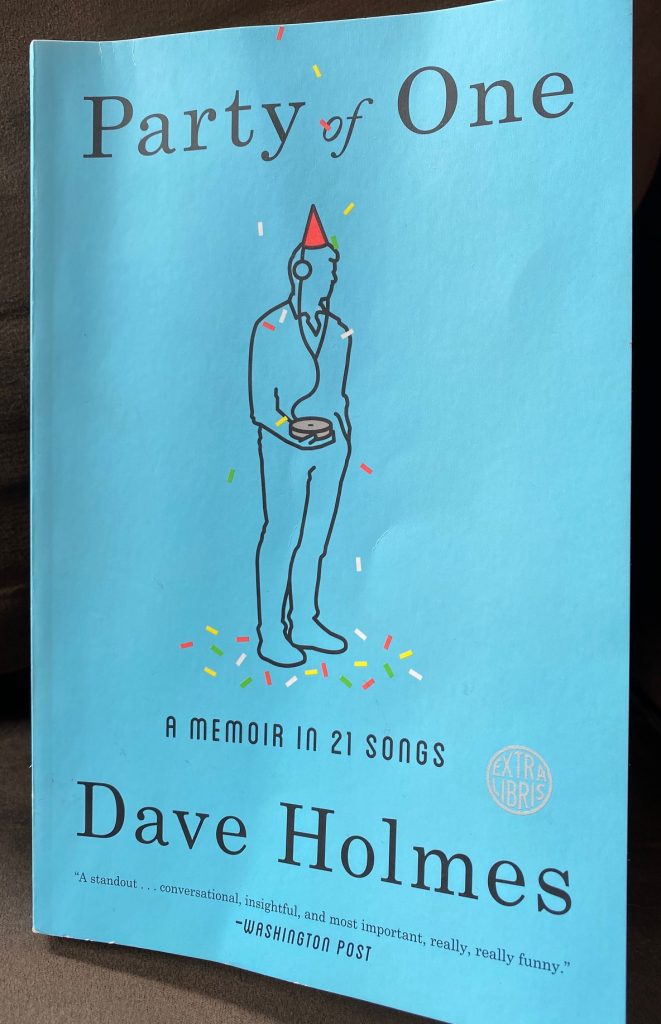 Former MTV JV (remember those?) Dave Holmes sells himself short in his own memoir. I’m not sure if he is trying to be humble, or downplay his skillset, but he makes it sound like he had no business being on MTV which is ridiculous. I remember him being an outgoing but easygoing VJ with extensive music knowledge who effortlessly handled all the musicians and nutjob spring breakers he came in contact with during his tenure.

In addition to knowing his way around a microphone, Holmes demonstrates that he is a talented writer as well. So much of what he talks about in Party of One is extremely brave but also extremely sad; for example, it was tremendously difficult for him growing up in a time when homosexuality was taboo. Throughout his childhood and young adult life, he felt he needed to hide who he was and spent a lot of time pretending to be someone else while curbing all kinds of sadness and frustration. He says, “It’s downright terrifying for someone to tell his/her friends that he/she is part of this socially unacceptable part of the populace.” My heart went out to him again and again while reading.

Although the book does include a great deal of self-depreciation, there are also as many funny lines and music and pop culture references. Demonstrating how his childhood foreshadowed his future, Holmes explains that MTV had a huge impact on him as a young boy: “If you were a kid on the margins, you could turn on your television and get a window into a world you could see yourself in someday.” During his childhood he also begged his parents to enroll him in a summer writing class and it changed his life. Of course, I love that. He says, “These were the kids with whom I could trade mixtapes.” He also explains that he and his classmates had “found the confidence that comes with finding your tribe.” No truer words.

Two of my favorite aspects of the book is 1) Holmes’ ability to attach songs to his most significant life moments and 2) the fact that he corrected the grammar on MTV cue cards that only he would be reading. He also points out that twenty years ago we were all part of a Monoculture – “when we were all watching the same three networks and listening to the same Top 40 radio stations.” My have times changed as mainstream radio no longer exists. Another interesting observation he makes is how the 90s were a time when – for better or worse – people “existed in the actual world. You looked where you were going. You were alone sometimes. And you didn’t think you’d ever be nostalgic for it.” So true.

Though I must admit that I wanted to read some juicy, behind-the-scenes MTV stories, I get why Holmes makes a point of saying that he was determined not to write a showbiz tell-all. However, he does drop a few gems about a couple of famous people including Kid Rock, Tara Reid, Tommy Lee, Puff Daddy (“who knows everyone’s name and is always at work”), and Mark Wahlberg, among others. The interlude chapters, which are an homage to hip-hop albums from the 90s that featured unnecessary skits between songs, are a nice touch because he lists how certain songs and albums impacted him. One of the most interesting lists: “The Ten Most Important Videos from My Tenure At TRL” which features a lot of pop (Britney, NSYNC, Destiny’s Child, Christina), along with Eminem, Limp Bizkit, and Live. So random, so 90s. His accounts of why each video mattered are solid gold – especially when he describes Britney as being “media-coached to within an inch of her life.”

It’s interesting (and probably extremely annoying to Holmes) that he is inextricably linked to Jesse Camp. For those too young to remember, Camp was the insanely tall waif with ridiculously teased hair, a caricature voice, and clothing that might have made Axl Rose blush. I remember watching the Wanna Be a VJ contest and thinking this guy is going to win because he’s so over-the-top and that when he does win he’s going to SUCK at his job. Turns out, Holmes thought the same thing and we were both right. I also remember Holmes nailing his audition. But the way he tells it makes him sound like some second-rate amateur who had no business being there. Not accurate. Camp was a disaster VJ and Holmes became an MTV staple for three years.

While Holmes dedicates an entire chapter to his weird hippy drug experience in Laurel Canyon, he glazes over his standup comedy stuff, the fact that he’s now an editor-at-large for Esquire.com, and how he has been and continues to be the host of several television shows, radio shows, and podcasts. I get that people have trouble selling themselves but come on – this is your memoir! That being said, his extra chapter at the end about his parents digs deep. It’s some of his best writing and, of course, includes some pop culture: “And so the world spins. Right round, like a record, baby. Our songs and our stories can heal us all if we let them. And nothing, nothing, nothing can take them from us.”

A few of my favorite pop culture/music references and observations:

Overall, Holmes’ book is well-written, thoughtful, brave, sad, and clever. I’m glad I read it but was left looking for a little bit more about who he is today. While I get that the 90s were a pivotal time for both him and the music industry, this book was written in 2016 and he’s done so much more in his post-MTV career. Still – he has a lot of courage for telling embarrassing stories, revealing personal anecdotes, admitting things about himself, and recounting the lessons he learned. He’s come a long way, baby.