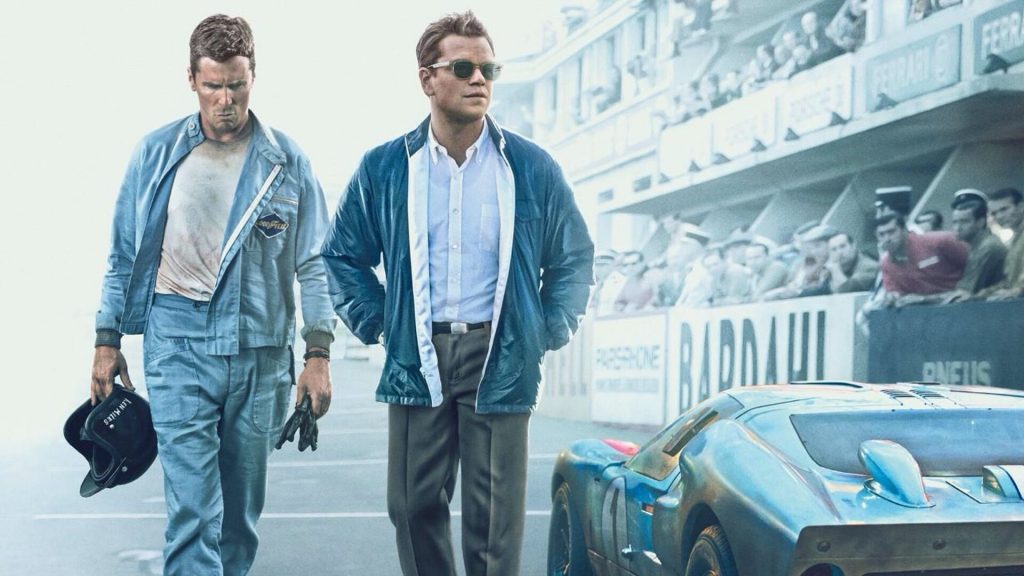 Usually I read about movies before seeing them but I didn’t read anything about Ford v Ferrari because I literally and figuratively wanted to go along for the ride. Also, I decided that since Oscar winners Matt Damon and Christian Bale were starring in a true story about car racing it had to be good. And it was. The surface premise is this: because the Ford Motor Company is tired of losing to Ferrari in races like La Mans, they bring on a team of American engineers and designers to build a car that will defeat Ferrari. But the real story is the friendship between and determination of Carroll Shelby and Ken Miles.

Although the title of this movie is Ford v Ferrari, it’s really not about the car manufacturers. It’s about the people behind the cars. Damon plays Shelby, a racing driver turned automotive designer who is best known for his involvement with the AC Cobra and Mustang (later known as Shelby Mustangs). Bale plays Miles (hopefully the irony of his last name is not lost on viewers) who is Shelby’s racing driver buddy and the reason that modifying Ford’s cars was successful.

While Shelby is a Texan who disagrees with but understands the role of red tape, Miles, who is described as “difficult,” is laser-focused on creating the fastest and most efficient racing car in history. He is difficult because he mouths off and says exactly what he thinks – not because he puts himself or anyone else in danger. Except for the fact that his work entails driving machines that are designed to operate at 200 miles an hour. Miles has a need for speed but, refreshingly, not in a reckless way. In fact, Miles takes his craft very seriously – no played-out instances of a renegade driver showing up to work hungover or disappointing his family with drug or alcohol addictions. He is extremely devoted to his fabulous wife who supports his dream and his sweet son who idolizes him.

As with most visionaries who don’t have the money to do exactly what they want to do, Shelby and Miles run into corporate pains in the ass who think that image is more important than experience, knowledge, and logic. Josh Lucas plays Leo Beebe who hates Miles because he’s not a “Ford man.” Whatever the fuck that means. As a result, Shelby has to constantly explain to the suits that while they’re all sitting around talking, “Miles is out there getting it done.” He is elbows deep in engines trying to make their car the best it can be, listening to radio announcers talk about race tracks, and tweaking the details night after night.

Shelby and Miles’ best advocate at Ford is marketing guy Lee Iacocca (an excellent Jon Bernthal) who initially comes up with the idea that Ford needs a newer, sexier, and faster look. He helps convince Henry Ford II (Tracy Letts) that building the Ford GT40 is the best idea for the future of the company because they want to trounce the perpetually dominant Ferrari at the Le Mans race in France. Ford II doesn’t totally get it until Shelby takes him on a wild ride in one of the film’s most poignant scenes.

Showcasing their undeniable movie star capabilities, Damon effectively exudes strength as Shelby who understands why playing the corporate game (to a degree) will get him and Miles what they ultimately want – a history-making car. Bale (no stranger to going method in all of his acting gigs) is so rail thin that the clothes he wears are falling off of him. Yet he’s the strongest person on screen who delivers the best lines. Miles tells Shelby that “Ford hates guys like us because we’re different” and he’s right. But, in order to make their mark, the two renegades need Ford’s money which means (sort of) playing by their rules. Damon and Bale handle their roles perfectly – it’s especially fun seeing the former in a series of ridiculous shallow cowboy hats and the latter speaking in his native accent.

Action bio dramas are typically a genre I love but Ford v Ferrari is more than just an action flick. Don’t get me wrong – all of the racing scenes are exciting, and somehow are shot in a way that looks like zero CGI was used, but the relationships and examples of determination are what shape the movie’s core. Even if the viewer knows what happens in terms of the plot, the edge of their seat is where they’ll stay. There’s a reason why Shelby Mustangs have been film fixtures – i.e. Gone in 60 Seconds, Charlie’s Angels, Thomas Crowne Affair, Fast and Furious 3, Diamonds Are Forever, and the list goes on and on – because they are synonymous with fast and cool. And that’s because Shelby and Miles made them that way. Watching the history of the cars, the companies, and the two friends who needed each other to succeed makes this movie not only worth seeing, but worth seeing on the big screen.