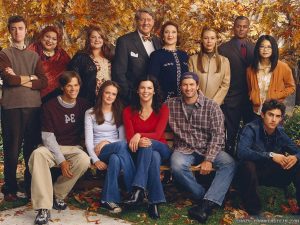 As I mentioned in my post about Shark Tank, the holidays are a great time to catch up on shows and even start watching a new series. I had never seen one episode of Gilmore Girls and didn’t even think about the show until I got inundated with articles about the revival that was taking place thanks to Netflix. Then I remembered how much my best friend loved Gilmore Girls. When I asked her if she thought I’d like the show she said yes but warned me that there were seven seasons and each one had 21 or 22 episodes. Just when I decided that it was too much of an investment, I found out that the show featured several actors I really like including Melissa McCarthy, Milo Ventimiglia, and Matt Czuchry. After that realization I decided to go for it.

Now I must admit that I did some skipping around. I probably watched 100 of the 153 episodes because some of the plotlines just didn’t move fast enough and some of the plotlines were a but too PG for me. Not that I need to watch hardcore shows that only air on Netflix, HBO, or Showtime, but I did find some of the episodes just didn’t grab my attention. Maybe I’ve become too used to warp speed storylines of Shonda Rhimes shows. That being said, so much of the show is great – especially Lorelai’s mother Emily who is the epitome of the judgmental, country club going, martini drinking, committee chair, disapproving mother who was so quick with an insult it was mind-blowing. Also, Rory’s enemy turned best friend Paris was so insanely obsessed with school and her future that her madness actually grew on me. It’s hard making characters like the two of them likable but those actresses are just that good. And those are just two examples of the ensemble

Because I prefer moving the story along, I have to say that the four revival episodes were more fun to watch than the actual series. Of course, it’s not fair to compare seven years of television episodes to four feature film length chapters but that’s how I feel. “Winter,” “Spring,” “Summer,” and “Fall” (yes, that order pays homage to the song) were engaging, exciting, well-written, and featured almost all of the characters that Gilmore Girls brought to the television world.

5) Everyone’s name begins with an “L”: It’s no secret that I’m a fan of the letter L so of course I love that so many characters’ names begin with my favorite letter: Lorelai, Luke, Logan, Liz, Lane, LuLu, Lindsay, Louise, and Lucy. Boom!

4) Prominence of pop culture: While everyone who has ever seen the show recognizes the never- stops-talking nature of Rory and Lorelai, the quantity of words that come out of their mouths is not the best part. The pop culture references are. Why? Because some of them are so obscure it’s ridiculous and the number and scope that are crammed into a given episode is pretty amazing.

3) The town: Never have I ever seen a nuttier group of people in a kooky town in an uppity place like Connecticut. But the town’s kookiness is what makes it great and, ultimately, its own character. Who thought of the name Stars Hollow anyway? Is that a happy version of Sleepy Hallow? I also get a kick out of how there is a shop for everything – books, flowers, food, beauty supplies, etc. but there is not one bar in sight. What? Also, those random musicians that sing all over town are out of place but still funny, and provide some music for a show that is laced with so much comedy that, after watching the first few episodes, I couldn’t believe there was no laugh track.

2) The dynamics: This show is all about relationships and the main ones are realistic and entertaining to watch. Although the central mother/daughter relationship between Lorelai and Rory is definitely the most unique, Lorelai’s relationship with her parents is spot on as it depicts a rebellious female only child who couldn’t be more different than her two conservative parents. Also, the friendship and subsequent romance between Luke and Lorelai is fantastic – he’s just the right mix of “set in his ways” toughness and “always there for her” sweetness.

1) Smart writing: Clearly Amy Sherman-Palladino knows how to tell a story which is evident throughout the first six seasons of the show and the revival. According to what I’ve read, a big reason for the revival episodes was because she wanted to write the ending she didn’t get to write when contract issues kept her from contributing to season seven of the show. Palladino put some serious thought into who she wanted her characters to be and who she wanted them to become. I of course also like that both Rory and Jess end up becoming writers.

Favorite surprise: Sebastian Bach as dopey singer and guitarist Gil. I am and will always be jealous of his hair.

5) The Dragon Fly Inn never changes: Don’t get me wrong – I love that Lorelai and Sookie purchased and renovated the Dragonfly. But time moves on an even a boutique hotel located in a town as (apparently) busy as Stars Hallow needs improvements now and again to stay relevant. I’m glad that in the revival Michel threatens to leave because Lorelai won’t expand. It was a realistic and necessary plot point that needed to be acknowledged.

4) Rory’s baby voice: Although it’s been over 16 years since I was 16, I’m pretty sure I didn’t have a baby voice when I was a sophomore in high school. Of course everyone’s verbal tone is different but it was almost like Alexis Bledel was trying to sound more innocent by talking like that throughout the show. I was thrilled that her voice no longer sounded like a munchkin in the revival.

3) No one shuts up (except Luke): Even though part of the quirkiness of the show is how Lorelai and Rory can talk and talk and talk sometimes it was too much. I think it’s funny how the former had the ability to talk anyone into anything (mostly because they were worn down by her never-ending chatter), but there were some instances where enough was enough. Paris, Kirk, and Babette were three more chatterboxes. And Taylor could never stop talking either – whether he was hosting town meetings or organizing events around town, his mouth never stopped moving. Speaking of which…

2) Town meetings: I assume that town meetings were meant to drive the plot forward but wow they were ridiculous. No one in any town on the planet has that much input on local government and some of the topics were so absurd they weren’t even funny. I saw those meetings as space filler more than anything that was helping tell the story.

1) Lane’s mother: She was the worst. So old school Korean to the point of almost ruining Lane’s life. I understand that her strictness was meant to serve as conflict for Lane and give her more screen time but that woman was awful. Always screaming at people or being short with them. Unlike Emily, there was nothing funny about Mrs. Kim.

Least favorite surprise: Until I watched the revival, I had no idea that Edward Herrmann (who played Richard the grandfather) passed away. I loved the way Palladino made his death such an important part of the storyline – he deserved it.

Now that I’m all caught up on all things Gilmore, I’m wondering if that cliffhanger of an ending given to us courtesy of the revival means more to come from Stars Hallow. If so, I’ll be ready.