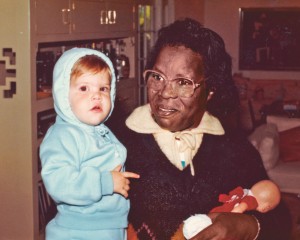 Bernise Jenkins was a force to be reckoned with.  She was no-nonsense, she was tough and she was the best.  She raised my mother, my aunt, my two uncles, my cousins and me.  She shaped all of us.  My grandmother hired her in 1953 – a year after my mother was born – to help her take care of her kids.  And take care of them she did.  Ber was part of our family from the moment she stepped into our lives and that never changed.

For two generations she took care of us.  She was there for Marshall’s little league games, for my softball games – she carted us around everywhere.  She even introduced us to her friends in Overtown – they loved us.  She called us her white children. She always told the story that when I would bite Marshall she would tell him to bite me back.  (I don’t recall being so mean to my cousin but there was no arguing with Ber!)  When I pouted she made fun of me and made me laugh so hard that I forgot what I was pouting about in the first place.

She was an amazing cook – Ber’s French fries were the best without question.  My mother loved her fried chicken – it was like it tasted better because Ber made it.  Whenever we fought Ber was there to break it up – when something great happened she wanted to hear all about it.  Her bulletin board might as well have been page 6 of the New York Times.  Everyone wanted their picture on her bulletin board – that meant you were in.  I remember when she first met my boyfriend Rodney – she loved him!  She thought he was so handsome and the first thing she showed him when I took him to her house was the photo of the two of us she had on her bulletin board.  That was it – he was in.

Ber always had her opinions- whether we liked them or not – and she always told us exactly what she thought.  It didn’t matter what the topic of conversation was, Ber had an opinion.  She also loved sports.  Football and basketball were her favorites and she and Marshall would talk about the Dolphins and the Heat for hours.  Just like our grandfather she always wore baseball caps and they were always in support of her teams.  It didn’t matter what was going on – if there was a game on television she was watching. No questions asked.

Bernise became “Ber” when Marshall and I were little and couldn’t manage to pronounce her full name.  And it stuck.  She was Ber from that moment on.

In the last few years Ber’s health started to fail and if it wasn’t for my mother and aunt she wouldn’t have received the top notch care that she needed.  Her loving nieces Betty and Michelle were there every step of the way and if it wasn’t for Julia, Carliqua, Janet and Anabelle, Ber would not have been as comfortable and happy as she was in her last few years.  We will forever be grateful to them for everything they did for her – the woman who took care of our family for six decades.

When someone mentions Ber it’s hard not to talk about Bok as well –her partner for 20 years.  They were a great pair and every time we walked through the door of their house they were always happy to see us.  I miss them and the look on their faces because they made coming back to Miami so much better.

Mom always told me that our grandmother called Ber “Helen of Troy” when she was young because she always had men running after her.  That makes me laugh but doesn’t surprise me because everyone always wanted to be around Ber.  She was a lot of fun and always made you feel like you were her number one priority.

We will miss Ber more than anything in the whole world.  She was our rock – kindhearted but tough as nails at the same time.  We respected her opinion and always wanted to know what she thought – and she would tell us.  Our family is forever grateful to Ber and everything she did for us.  She was important to each and every one of us and I know for a fact that Ber stories will be told for many generations to come.  We miss you and love you Ber.