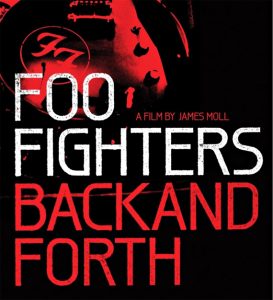 Released at Austin’s SXSW Festival in March 2011, Back and Forth is a documentary that chronicles Dave Grohl’s journey from drumming for Nirvana to starting the Foo Fighters, and continuing all the way through their album Wasting Light. As a longtime Foo Fighters fan, I knew some of the backstory but the documentary also provided a ton of new information that depicted a different side of Grohl and the revolving door of band members.

Although the film was released in 2011, it didn’t become available on Netflix until September 2017 and this week I finally had a chance to watch it. I enjoyed hearing all the details that gave Grohl the strength to turn down Tom Petty, get past Nirvana, and put together one of my favorite rock and roll bands of all time.

I’ve always joked that Grohl is my spirit animal and if I had the option to meet one living musician he would be it. His passion for music is undeniable and I love that about him. All that being said, this film marked the first time I heard negative comments spoken about Grohl which was surprising but also humanized him a bit. Hearing that he wanted things his way, even if people’s feelings got hurt, was unexpected but honestly didn’t make him any less likable.

A few thoughts on the documentary – which won a Grammy Award in the Best Long Form Music Video category – and what I learned:

During the Wasting Light recording sessions, which took place in Grohl’s home, one of his daughters came in to ask him to go swimming. He told her he was going to take a “five-minute lyric break” and then get in the pool with her. While they swam, Mould sang his part of the song and then everyone gave it a listen when Grohl returned with wet hair.

I love that Grohl is a real person who loves making great rock music as much as he loves his family. He drives around with a Motorhead air freshener dangling from his rearview mirror and still plays small clubs like the Roxy even though his band has sold out stadiums with capacity numbers that reach well into six figures. It really is amazing how many great songs and albums the Foo Fighters have produced over the last twenty years. I will always be a fan.

Grohl recorded the whole record himself and chose the name “Foo Fighters” to hide his identity as he passed cassette copies to close friends. After these tapes attracted record label interest, Grohl signed with Capitol and recruited a full band to perform live.

The Color and the Shape (1997): Main singles “Monkey Wrench,” “Everlong,” and “My Hero” peaked within the top ten on rock radio and the album was nominated for a Grammy Award for Best Rock Album.

The album marks the first appearance of drummer Taylor Hawkins and it won the Grammy Award for Best Rock Album in 2001.

The album was nominated for five Grammy Awards: Best Rock Album, Best Surround Sound Album, both Best Rock Song and Best Rock Performance by a Duo or Group with Vocal for “Best of You,” and Best Pop Collaboration with Vocals for “Virginia Moon.”