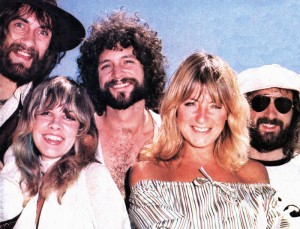 Although seeing bands/artists I never thought I’d have the chance to see is awesome in theory, the key is for it to be awesome in life as well – i.e. comeback tours are no fun if no one has a voice left. Lucky for me, the acts I’ve seen sounded so good it might as well have been 1985. About eight years ago I got to see Eric Clapton and Prince in the same summer and they were two of the most unforgettable music nights of my concert-going career. I was also fortunate enough to see John Mellencamp in 2011, Billy Idol in 2006 and Billy Joel and Elton John in 2010. Apparently their voices don’t age.

So now that we are more than halfway through 2012, musicians are already talking about 2013 tour dates and the biggest announcement yet is that most of the Fleetwood Mac lineup will reunite for a world tour next year! According to Stevie Nicks, who was interviewed on CBS This Morning, she, Lindsey Buckingham, Mick Fleetwood and John McVie will be going on tour. Unfortunately Christine McVie has chosen not to tour and former band member Bob Welch died of a self-inflicted gunshot wound in June.

Given that it’s been awhile since Fleetwood Mac has been topical, here is a little reminder of how big of a deal this band is:

Fleetwood Mac’s second album, 1977’s Rumours, produced four U.S. Top 10 singles and remained at number one on the American albums chart for 31 weeks, as well as reaching the top spot in various countries around the world. It also won a Grammy for Album of the Year. To date the album has sold over 40 million copies worldwide, making it the eighth highest-selling album of all time.

A few of their biggest hits:

Current Fleetwood Mac news: Producer Ken Callait has published a new memoir called Making Rumours which is about the recording of the Grammy-winning album. (I just purchased it on Amazon so expect a review in the near future). Also, a big-name tribute album, Just Tell Me That You Want Me, which features Best Coast, Billy Gibbons of ZZ Top, the New Pornographers and the Kills, among others, drops on August 14.

Cross your fingers for me that Fleetwood Mac includes Denver on their tour schedule! And let’s hope that Nicks’ voice has held up as well as some of her cohorts.