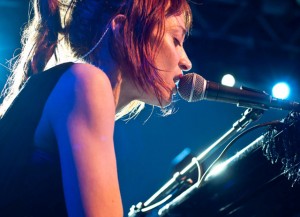 Even though talk shows are normally not Fiona Apple’s gig, last night she appeared on Late Night With Jimmy Fallon. The host brought up Apple’s infamous 2000 Roseland Ballroom meltdown – which, turns out, was preceded by a ten-minute comedy act from Fallon himself.

Apple explained her actions that night by saying, “The short answer is that I’m a human being and I was reacting to life.” She also said that she was feeling “overwhelmed” at the time, citing her Saturday Night Live appearance that month.

“I started crying,” she continued. “And I could not physically stop crying. I couldn’t.”

She also looked right into the camera and, while holding a billiard ball, said “If you didn’t give me this [billiard ball] then the song is not about you.”

As much as I like Fiona Apple I think that she can be very dramatic and her explanation about why she had a public freak out kind of made me roll my eyes. She is a performer and if she can’t perform she needs to be an adult and either suck it up or get off the stage.

But remember that Apple is no stranger to public outbursts. In 1997, while accepting an MTV Video Music Award for “Best New Artist” for her song “Sleep to Dream,” Apple said: “This world is bullshit and you shouldn’t model your life on what we think is cool and what we’re wearing and what we’re saying.”

Fair enough – I get so sick of artists doing the usual thanking God and the fans – but how about saying thank you for the recognition? If Apple wants to speak her mind more power to her but don’t be ungrateful and don’t bite the hands that feed you.

That being said there is no question that Apple is talented. In addition to numerous MTV Awards and Billboard Awards, among others, she has been nominated for six Grammys and won one in 1998 for “Best Female Rock Vocal Performance” for what is arguably her most popular song, “Criminal.” People love her deep growl of a voice and her piano and song writing skills are astounding. Especially considering that she was 19 -years-old when she won that Grammy for a song that came from her debut album Tidal.

So now that she’s 34-years-old and her fourth album The Idler Wheel… hits stores and iTunes today, it will be interesting to see how it goes. Is she older and wiser? Is her music still good? Let’s hope so because a talent like that should not be remembered for crying and yelling into cameras. Instead Apple should be recognized for her unique voice and her ability to write her own songs and play an instrument very well. She’s a triple threat – something that is becoming increasingly rare in the music business so let’s hope she continues to be great.