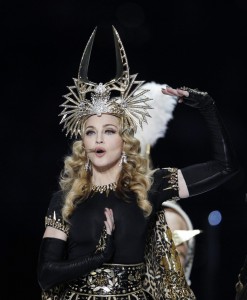 1) Happy 50th Birthday Axl Rose!!! For all the haters out there who think Axl is out of shape or has lost his singing voice think again. In December he put on one of the best rock and roll shows I’ve ever seen.

2) Goooo Giants! I know Dave Mescon and Jamie Shapiro are having a great Monday!

3) While I’m definitely not a Madonna fan she put on one hell of a Superbowl halftime show. She still can’t sing but at 53-years-old she danced, lunged, squatted and danced her ass off. In other news, did she steal that headpiece from She-Ra?

4) Cee Lo Green is a badass. With his unique voice and Elton John-esque attire he is an asset to any song, show or concert.

5) MIA – in the post-Janet Jackson/nipplegate world we are living in you showed some serious balls. Loved it.

6) Jerry Seinfeld has aged a little bit but is still as funny as ever.

8) Loved the Chevy Silverado “end of the world” commercial – I’ve always wanted one of those.

9) Move over over Faith Hill and Tim McGraw! Miranda Lambert and Blake Shelton are now the coolest couple in country music.

10) Kelly Clarkson’s new look has turned her into Zooey Deschanel/Erica Garvey’s twin! I thought she looked great and sounded great. For those who have screwed up singing at sporting events in the past watch Clarkson’s performance again. That’s how you sing the National Anthem.