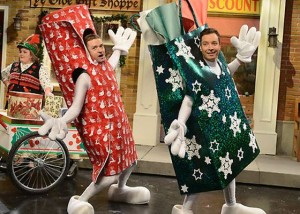 On September 26 I wrote about why I think Jimmy Fallon and Justin Timberlake are the best comedic duo of my generation. What prompted that particular post was the duo’s latest viral skit “Hashtag” which parodies our social media world and the overuse of the term hashtag. At that point the skit had earned over seven million views on YouTube – three months later it’s up to over 20 million views. Yep, they’re that good.

When I heard that Fallon and Timberlake were going to be co-hosting Saturday Night Live on December 21 and I couldn’t wait to watch it. Knowing that I’d be out on that particular night I set my DVR and decided I would do my very best to ignore comments and social media posts regarding the show until I was able to watch it. Finally I got to watch the episode tonight and to say it lived up to my extremely high expectations is an understatement. And I’m not the only one who loved it.

That night SNL posted its biggest overnight numbers in nearly two years which was when Charles Barkley and Kelly Clarkson were on in January 2012. But if you exclude weeks where the ratings were boosted by NFL overrun, last week’s Fallon/Timberlake performance garnered the highest ratings since May 2011 in an episode that starred Timberlake and Lady Gaga. Exemplifying their force as a duo, the results beat prior Christmas editions hosted by Jimmy Fallon (in 2011) and Timberlake (in 2006).

In addition to Fallon and Timberlake, the episode featured drop-ins by Paul McCartney, Barry Gibb, Madonna and NYC Mayor Michael Bloomberg. Although that’s some serious star wattage the three of them had minor roles – it was without a doubt the Fallon/Timberlake show even though the latter was technically billed as the “musical guest.”

Clearly SNL benefits from guests who can act and sing – Fallon and Timberlake can each do both – but as I’ve said before these two are a powerhouse duo. Whether they are singing about wrapping gifts, the history of rap or playing entertainers like the Bee Gees, these guys get it. They are funny, talented and are serious entertainers. While Fallon appeared in every skit, Timberlake appeared in most and turned in two completely different performances – one was a Michael Jackson/dance heavy/light show extravaganza and the other featured him sitting on a stool playing acoustic guitar. The guy can do it all – it’s unbelievable. Meanwhile, his counterpart will be taking over The Tonight Show in February 2014. No big deal.

Congrats Jimmy and Justin – you had me at “Wrappinville.”