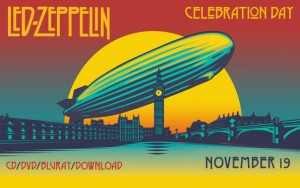 Apparently fall is the season when the big guns of rock & roll release DVDs that contain concert footage, candid photos and other miscellaneous clips. For the Rolling Stones it’s a documentary that takes a look back at their career and tracks their rise to becoming one of the biggest bands in the world. For Led Zeppelin it’s a DVD of their December 2007 one-night-only reunion concert that took place at London’s 02 Arena.

Titled Celebration Day, Zeppelin’s film hits 1,500 screens today – the day before the Rolling Stones’ documentary Crossfire Hurricane debuts at the London Film Festival via satellite to over 250 cinemas across Europe (see my September 26 post). Celebration will then be released on “multiple audio and video formats” on November 19 – just four days after Crossfire Hurricane airs on HBO.

While the Stones’ documentary was created to commemorate the band’s 50th anniversary, Zeppelin’s movie is simply a concert DVD. So for the Led Zeppelin fans (including me) hoping that the band was going to announce a new tour this week, unfortunately the closest we’ll get to seeing the band live is by watching Celebration.

So why such close dates for these DVDs? I could understand if they were both looking for a holiday release but initial release dates in the middle of October and then other formats in mid-November? What is the deal?

Also, how do we feel about concerts on DVD? I think there is a time and a place for concert DVDs i.e. playing them on a flat screen during a party but do people really sit around and watch these DVDs on a random night? Even though Led Zeppelin is one of my favorite bands ever I would much rather watch a fun documentary about them (i.e. what the Stones’ did for their Crossfire film) than just a video of them playing an amazing show I didn’t get to see live.

Do you watch concert films or music documentary films? If so, when? Will you be seeing Crossfire Hurricane and/or Celebration Day? I would love to know your thoughts.