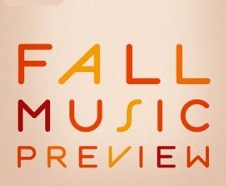 Fall is my favorite season – especially the month of September – so I’m eager to talk about one of the most exciting aspects of this time of year. Here are a few albums I’m looking forward to hearing as the leaves change:

Bennett singing jazz standards? Sign me up! Gaga singing jazz? Better than I thought! If the entire album is as fun and catchy as “Anything Goes,” these two will have a hit record on their hands. The unique pairing of older and younger stars singing popular songs by icons like Cole Porter, Duke Ellington and Irving Berlin might just be one of the most delightful combinations of the season.

Prince is so rad that he’s releasing two albums on the same day. The latter features 3rdEyeGirl – the girl group that accompanied him on his last small venue tour – which is great news because after seeing all of them perform together live I’m very excited about the album. These girls push Prince to rock hard and the song “pretzelbodylogic,” although ridiculously titled, is exactly the kind of funky rock I like most from our favorite artist in purple.

Who doesn’t like unreleased gems from one of their favorite female singers? Slated to include new versions of demos that Nicks recorded between 1969 and 1987 and a few from the mid-1990s, the eighth solo studio album from Ms. Fleetwood Mac sounds good so far. “The Dealer” and “The Lady” show us why Fleetwood Mac became a worldwide sensation when Nicks joined the band as the sound of her voice and the words coming from it tell some of the best stories in rock and roll.

Dave Grohl is becoming quite the documentary master these days. Last year’s Sound City was a soulful, powerful and creative film about one of the most legendary studios in the country that produced an original compilation album with a wide range of artists including Paul McCartney, Stevie Nicks and Rick Springfield. But that wasn’t enough for my favorite rock and roll hero. On November 10 the Foo Fighters will release their eighth studio album called Sonic Highways which is comprised of eight songs recorded in eight different cities: Austin, Chicago, Los Angeles, Nashville, New Orleans, New York, Seattle, and Washington, D.C. But before the album is released, HBO will debut a series of the same name on October 17 which chronicles the band’s tour de America with interviews by icons like Willie Nelson, LL Cool, Bonnie Raitt and Dolly Parton, among others. In the trailer, Grohl says this effort is a love letter to the history of American music. I can’t wait.