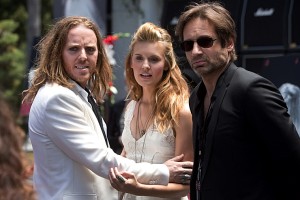 The title of the latest episode of Californication couldn’t be more perfect. After the last few episodes relied way too much on shock value, I was getting worried that the writers of the show had lost their mojo. But after watching “Critic” I was pleasantly reminded of why I began watching this show in the first place:

-It featured some stellar Hank Moody lines i.e. “People who aren’t writers should not be writers. Don’t storm off into silent treatment.”
-Music made a much needed comeback as the backbone of the show in the form of Faith singing Joni Mitchell’s “Big Yellow Taxi” with Hank on guitar.
-The focus of the episode what not annoying nutjob rock star pain in the ass Atticus Fetch stomping around like a child.
-We get front row seats to Hank and Becca’s complicated but refreshingly honest father/daughter relationship when they compare notes on their respective writing projects.
-Karen shows her teeth towards Hank (welcome back heroine!) when he doesn’t initially handle talking to Becca well.
-Stu and Charlie act like actual humans rather than sex-crazed animals and work together to pull Marcy away from her cult-esque, man-hating friend.

Long story short this episode brought back the creative intensity that makes Californication a must-watch. It demonstrated complicated relationships without getting too soapy, utilized authentic dialogue and it advanced the plot of the show. Sometimes Californication gets too wrapped up in its impressive guest stars (i.e. Marilyn Mason in last week’s episode) and forgets that there is a story that needs to be told. Yes the craziness is always fun – drugs, sex, nudity, f-bombs all over the place – and I enjoy the balls-out mentality of the writing and acting but none of it matters if a storyline does not exist.

I hope that the season continues on this trajectory because when it does it is absolutely one of the best shows on television. Otherwise I feel like I’m watching a bunch of screaming adults stomp around in a loony bin which is neither fun nor entertaining.

Welcome back Californication – I’ve missed you.