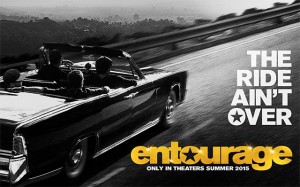 Last night I couldn’t wait to see the movie version of one of my favorite shows ever and I’m pleased to say that it was as fun as the lives portrayed by the four main characters the show centered around. Similar to its HBO series turned movie predecessor Sex and the City, Entourage the movie picks up right where the show left off four years ago. Well actually nine days later – when Vince gets a divorce on his honeymoon from the random journalist he quickly fell in love with at the end of the show’s final season (season eight). Glad that ridiculous storyline is over – I always thought it was bizarre that Vince’s story ended that way since she only appears in the final four episodes of the final season. I know Vince is all about spontaneity but give me a break.

As for the rest of the guys: Eric is about to be a father to his once again ex Sloan’s baby, Turtle is extremely rich and has dropped a ton of weight and Johnny Drama is….Drama. Meanwhile, Ari Gold is back in action as studio head who has hired Vince to direct and star in a movie called Hyde that is completely over budget. Vince is nervous because the movie marks his directorial debut, Johnny Drama plays a pivotal role and no one has seen it yet because Vince needs more money to perfect it. And that money needs to come from a Texas billionaire played by Billy Bob Thornton and his jerk face son played by an almost unrecognizable Haley Joel Osment.

In addition to attracting big name actors, in true Entourage form, the movie is full of impressive cameos. And most of those people are telling Ari to fuck off which is hilarious. In an effort to not spoil the cameo surprises I’ll just list a few: Liam Neeson, Jessica Alba, Mark Wahlberg, Gary Busey and David Spade. Those five names are seriously just scratching the surface because if you did the math and added up all the star power I can’t imagine your mind not exploding. Side note: The three Wahlberg buddies who Vince’s friends are based on appear in the movie.

What I like most about the movie’s use of these cameos is not only portraying Hollywood as a town that is crawling with famous people at all times but also choosing celebrities that appeared at least once during the eight seasons of the show. Which brings me to my next point – although I think the movie is so much fun that anyone would enjoy it, moviegoers who didn’t see the show will miss a lot of the references made throughout.

-I’m glad that the movie featured so many of the memorable characters from the series. So many people are back including Lloyd, Shauna, Ari’s wife and son (but not daughter) and the notorious Billy Walsh.

-The catchy Jane’s Addiction song “Superhero” used in the series was cleverly placed in the movie – although I don’t think producer/director/writer Doug Ellin needed to have his name presented in different ways for each title. It was a little much.

-We didn’t get to see enough scenes of Hyde and we got zero footage of Johnny’s performance which ends up mattering.

-Ari Gold may be one of the most quotable characters ever.

-Don’t leave after the credits roll the first time.

Without giving anything away I want to conclude by saying that the movie’s ending is a show-stopper that wraps up the story in an exciting and satisfying way. Enjoy!