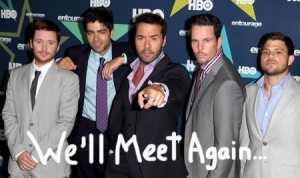 While I’ve always been a fan of Entourage I always recognized its flaws: There were many episodes where nothing happened, the characters took awhile to develop and sometimes the plot lines leaned way too heavy on the star cameos.

That being said there was a lot about Entourage I loved:  1) Three words – Ari Fucking Gold, 2) the fact that these guys came from nothing, got everything and always had each other’s backs and of course 3) the clever lines such as:

Johnny Drama: “It’s like when they killed off Brandon Walsh in 90210, destroying any chance of a movie.”

Through all the movies, the revolving door of women, all the cars (Maseratis, Ferraris, etc.) and the constant wheeling and dealing, the show was about four friends who would do anything for each other which is why viewers continued to watch over the years.  So to honor the show that is notoriously referred to as the male version of Sex and the City, here is my final list.

What I will remember most about Entourage:

-Drama going Point Break on some surfer guy on the highway

-Val Kilmer as a crazy Sherpa

-Ari getting fired and then his subsequent comeback tour

-When the Mandy Moore arc was over

-The relationship between Ari and Lloyd

-The look on Ari’s face in the final scene of the final episode when he gets a call in Italy to literally be the biggest agent in the universe.

See ya at the movie theatre…..