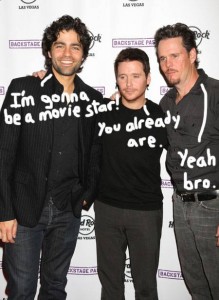 If you’re a fan of Entourage, the HBO series loosely based on producer Mark Wahlberg’s experience in his early Hollywood years, you should be excited about the fact that filming has begun on the long-anticipated movie. The show, which lasted eight seasons, was initially viewed as the male version of Sex and the City which is on target and totally wrong at the same time. Yes, it was an HBO show about four friends and their extravagant lives. But while SATC was a show about relationships and women destroying taboos, Entourage was more about exploring what Hollywood is really like and the role fame plays in longtime friendships.

At their height, both shows were provocative, innovative and very funny. They brought taboos to their knees by either kicking their ass or laughing at them in a way that was approachable and fun to watch. SATC “made it ok” to talk about whatever you want with your girlfriends and presented a way of life that wasn’t as regimented as high school, college, marriage, kids. Entourage showed the world that Hollywood is exactly how you think it is: everyone knows everyone, the cars and houses are extravagant, people always want you to show them the money and all of it can result in excitement or catastrophe or both.

So how does it work once the television series is over? SATC ‘s 2008 movie was a huge hit. Everyone was excited to see the progression of characters and all the ups and downs that went with that. Unfortunately the sequel was awful. All glitz and no substance.

Now that it’s Entourage’s turn for a movie it will be interesting to see the reception. SATC’s TV run ended in 2004 and the first movie was released in 2008. Entourage ended in 2011 and it sounds like the movie will be released in 2015. Apparently four years is the magic number for an HBO series to become a movie so we’ll see how it goes.

Where we left off: In the final episode, Vince tells the gang that he’s flying to Paris to marry Vanity Fair writer Sophia. Eric quits his job and announces that he’s moving to New York to try to be a good father for his child and reconcile with Sloan. Turtle and Drama try to convince Sloan to forgive Eric and fly to Paris for the wedding. Ari quits his job for his family and reconciles with his wife. In the end, Vince, Sophia, Drama, Turtle, Ari and Mrs. Ari fly to Paris for Vince’s wedding. In the post-credits scene, Ari and Mrs. Ari are resting on the Amalfi Coast when chairman and CEO of Time Warner John Ellis calls Ari to offer him his job at Time Warner. The final scene shows Ari contemplating the offer.

Hopefully Entourage creator Doug Ellin will put together a great movie – i.e. digging deep into what each character is doing now and what they have been doing for the last four years. As we learned with SATC, a lot happens in four years and it’s exciting to see where life has taken characters that audiences spent time getting to know and grew to love.