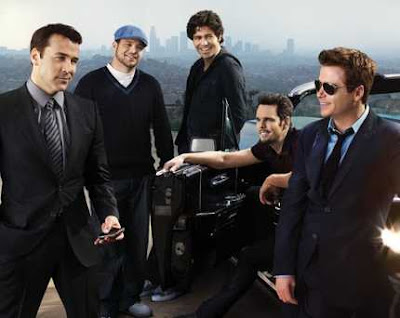 Loosely based on Mark Wahlberg’s rise to fame, Entourage debuted in summer 2004 when HBO introduced us to young, A-list movie star Vincent Chase, his older brother and his two best friends from Queens, New York. Over the years, the series has shown the four guys living the good (and wild) life in Hollywood which had included movie premieres, million dollar houses, sports cars and of course, lots of women. While Vince has the face and laid back swagger that makes women, agents, publicists and studio executives swoon, his brother Johnny has had trouble finding his niche as a Hollywood actor. Meanwhile, friends Eric and Turtle have gone from hangers-on to a successful talent agent and promoter, respectively.

As a fan of the show since the beginning, I’ve always enjoyed watching the craziness that is their lives but one of the biggest draws of the show has always been Ari Gold. Played by Jeremy Piven as if the role was written for him, super agent Ari Gold may be the reason why this show was only suitable for HBO. What comes out of his mouth is so shocking and so funny that sometimes you just want to fast forward to his scenes. I also love Ari’s former assistant turned agent Lloyd. He is a breath of fresh air in a cutthroat business.

In addition to Ari and the rest of the guys, the number of celebrity guest stars that have paraded through this show is like a who’s who of Hollywood’s A-list. On any given episode you could see stars like: Luke Wilson, Brook Shields, Lamar Odom, Hugh Heffner, James Cameron, Bob Saget, Edward Burns, Snoop Dogg, Martin Scorsese, Jay Leno, Matt Damon, LeBron James, Jessica Simpson and even Mike Tyson. And this list is just scratching the surface. In the most recent episode of Entourage we saw Lenny Kravitz, Mark Wahlberg and Puff Daddy all in one barely-30 minute show.

Although I’ve enjoyed Entourage since its inception there is no question that the current season is the best yet. Every character is showing more depth and subsequently the plots are much richer and more captivating. I find myself really excited for the next episode and bummed when I have to wait a week to see it. Vince, always the golden boy without a care in the world, is dating a porn star who is luring him into too much partying which is getting in the way of his career. He finally has to deal with real problems rather than his biggest issue being a decision between a Ferrari and Maserati. Johnny, unable to find a job, is finally facing the facts about his acting abilities, or lack thereof, and might have to rely on only his voice to get work. Eric, the voice of reason in the group, has decided to leave the circus that is Vince’s house and be an adult with a real job, home and fiancé. Turtle, who at long last has dropped that horrible NYC accent, is finding his stride both personally and professionally.

While the depth of these characters this season has been a very welcomed surprise, the biggest surprise has been the return of Billy Walsh. A one-time promising director, Billy was so out of control that he was borderline certifiable. He was crude, obnoxious, always drunk and/or high and could always be found screaming at people for no reason. After making a horrible movie that Vince starred in, Billy disappeared and no one missed him. However, this season, Billy has emerged newly sober and is both a husband and a father. He is calm, healthy and even has a very creative and exciting idea for Johnny to get back in the game. As opposed to dreading the sound of his voice in previous seasons, I find myself looking forward to hearing what Billy says next.

With its newfound momentum it’s a shame that HBO recently announced that summer 2011 will be Entourage’s final season. Although the number of episodes has not officially been disclosed, the final season will likely contain six episodes. The good news is that a film is planned after the series ends. Hopefully we’ll have the opportunity to see the four guys from Queens go from skirt-chasing, shot-slinging, egomaniac boys to successful, charismatic men. Cheers to that.