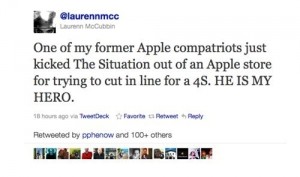 In the latest example of the Jersey Shore kids being idiots, Michael “The Situation” Sorrentino was kicked out of an Apple store for thinking that he was so important that he could cut everyone who was waiting in line for the new iPhone4S and get away with it.  Think again jerk off!  According to reports, he walked past dozens of patrons and demanded the phone.  The result: an employee kicking his entitled ass right out of the store.  Thanks for playing Mike!

Even though the Jersey Shore fools are probably some of the most ridiculous people to ever be on television they are most definitely not the first “celebrities” to get kicked out of all kinds of places:

In April of this year rapper Foxy Brown caused a disturbance over a manicure aboard a Royal Caribbean cruise ship and was ultimately escorted off the cruise.

At this year’s Paris Fashion Week Kanye West proved that a famous name means nothing when that name is not on “the list.”   Kanye thought that he had enough clout to crash three shows without a personal invite.  He thought wrong.

In July 2010, comedian Dave Chappelle caused a private jet to land early just so they could kick him off as a result of causing a ruckus over the bathroom facility.

Actress Sean Young (Finkle/Einhorn in Ace Ventura) was removed from the 2008 Directors Guild of America Awards after being a little too rowdy during the ceremony.

Model/spokesperson Michelle “Bombshell” McGee was tossed out of a 2010 MTV VMA party because she was flashing too many Nazi tattoos.

Just another day in the lives of celebrities living La Vida Loca!