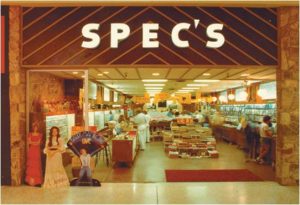 Of course I love Empire Records – it’s a movie about working in a record store! But it’s more than that. Released in September 1995, the movie’s premise of a corporate company taking over an independent record store was only four years ahead of the demise of the music business as a result of Napster’s 1999 debut. I lived all of that. My family’s business was sold in 1998 – luckily – because soon after the entire industry fell apart.

Anyway, I watched Empire Records so much I wore out my VHS tape which is funny because a friend of mine, who watched it for the first time yesterday, made the comment that the movie is the record store version of the Breakfast Club. *MIND BLOWN* Of course it is! Except instead of a brain, a beauty, a jock, a rebel, and a recluse, it’s a good girl with a closet pill problem, a romantic artist boy, a slutty girl who doesn’t care what people think, a goth girl who is deceivingly kind and smart, a sweet stoner boy, a clepto for a cause in a turtleneck, a rocker who never wears a shirt, and a hippie stoner.

A few of my favorite quotes:

1) Mark: [into television camera] Damn the man. Save the Empire.

Debra: God, that is so clever. I swear you get smarter the shorter your skirt gets.

Lucas: Well if Axl Rose was driving down the highway, and saw Rex Manning stranded on the side of the road, do you think Axl Rose would stop and help him?

4) Joe: Could you please not sing, Mark.

Mark: You know what Joe? One of these days, I’m gonna show you little people.

5) Lucas: Warren, look what you took. [going through the CDs that Warren stole from the store] Rap… metal… rap… metal… And Whitney Houston.

Warren: It’s for my girlfriend, okay?

6) Jane: What are you doing later?

Joe: I don’t know. I’m either going to jail or hell I can’t decide.

7) Rex Manning: Why don’t you all just fade away. 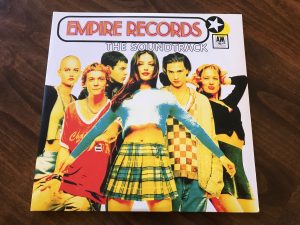 I’ll always have a place in my heart for Empire Records because I was that teenager working in the record store talking with anyone and everyone about music, directing customers to the rock section even though there was an enormous sign that said ROCK, discovering new music, and endlessly discussing the best and worst albums with coworkers. Because the company valued individuality, employees could dress however they wanted (within reason). They were only given name tags to wear around their necks – similar to laminates roadies or concert VIPs wear – which were usually decorated with band stickers and concert buttons.

It was the era when customers stood in line for concert tickets and new releases, and then hung out to watch The Wizard of Oz while Pink Floyd’s Dark Side of the Moon played over the store’s speakers. It was awesome and everyone loved working there. Just like in Empire Records, all the employees could pick CDs to play throughout their shift and if people hated your choice the album somehow went missing. Also, the in-stores (artists performing and signing autographs inside the store) could be really cool or could me really lame – kind of like Rex Manning Day. With his ridiculous clothes and manicured hair, he is the epitome of former teen idol trying to stretch his fame. And it’s hilarious.

My only major criticism of the movie is its soundtrack. Although I listened to that CD as many times as I watched the movie, there are so many songs in the film that should have been featured on the soundtrack. For example: Bulletboys “Smooth Up In Ya,” AC/DC “If You Want Blood,” and Sponge “Plowed.” The live version of “Sugarhigh” with Gina on vocals should have been included as well.

Until yesterday I had no idea that I knew anyone who had never seen this movie. Then I found out that I actually knew two people who hadn’t seen it. Although I doubt this will ever happen again, I feel compelled to end with this: If you’re a music fan and remember what it was like to shop at a record store, watch Empire Records. You will love it.