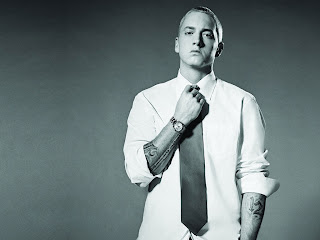 When controversial recording artists actually make good music instead of relying on their controversy, music magic happens. The latest example of this is Eminem’s new record Recovery which is an extremely well done follow up to his 2009 album Relapse. No stranger to calling himself out, Eminem even admits that his previous record was only so-so in one of his latest smash singles “Not Afraid.”

And to the fans, I’ll never let you down again, I’m back
I promise to never go back on that promise, in fact
Let’s be honest, that last Relapse CD was “ehhhh”
Perhaps I ran them accents into the ground
Relax, I ain’t going back to that now

With an amazing beat and his usual tongue-twisting but clever and biographical lyrics, Eminem is back. Although he has demonstrated many personas over the years including the cartoonish Slim Shady and the serious Marshall Mathers, the one singing “Not Afraid” is the one I prefer. It’s the same guy who blew us all away when he sang “Lose Yourself” on the 8 Mile soundtrack.

When he is gritty, real and well-spoken, Eminem has the capacity to knock everyone else off the charts like he did in 2002 (when he had both the #1 album and the #1 movie in the country at the same time) and like he did a few weeks ago when he knocked annoying Katy Perry out of her #1 spot with “Not Afraid.” He is brilliant when he wants to be and when he feels like being brilliant he’s hard to ignore.

I know there are a lot of Eminem haters out there (and rightfully so) but if you can get past his history of being called homophobic, racist, sexist, an addict, etc. and listen to a few songs then maybe you’ll change your mind. Or maybe you won’t. Maybe you think he’s an angry, punk ass white kid who doesn’t shut up and should just go away. But keep this in mind: This is a kid who came out of nowhere in 1999 with his bleach blonde hair singing “My Name Is” and he caused such a stir that Rolling Stone put him on the cover. (I remember the first time I heard that song; it was when my friend Josh brought it over to my parents’ house saying it was the best rap song he’d heard in awhile).

Back in 1999 when bubblegum pop was ruling the charts, people couldn’t decide if Eminem was going to be a one-hit idiot like Vanilla Ice or if Dr. Dre’s new protégé really was worth talking about. Eleven years later he’s still around and right now he has the #1 song in the country with another Recovery gem called “Love The Way You Lie” which features go-to hook master and a personal favorite of mine, Rhianna. Now that he has over a decade of music business experience under his belt, maybe Eminem really does have something to say.