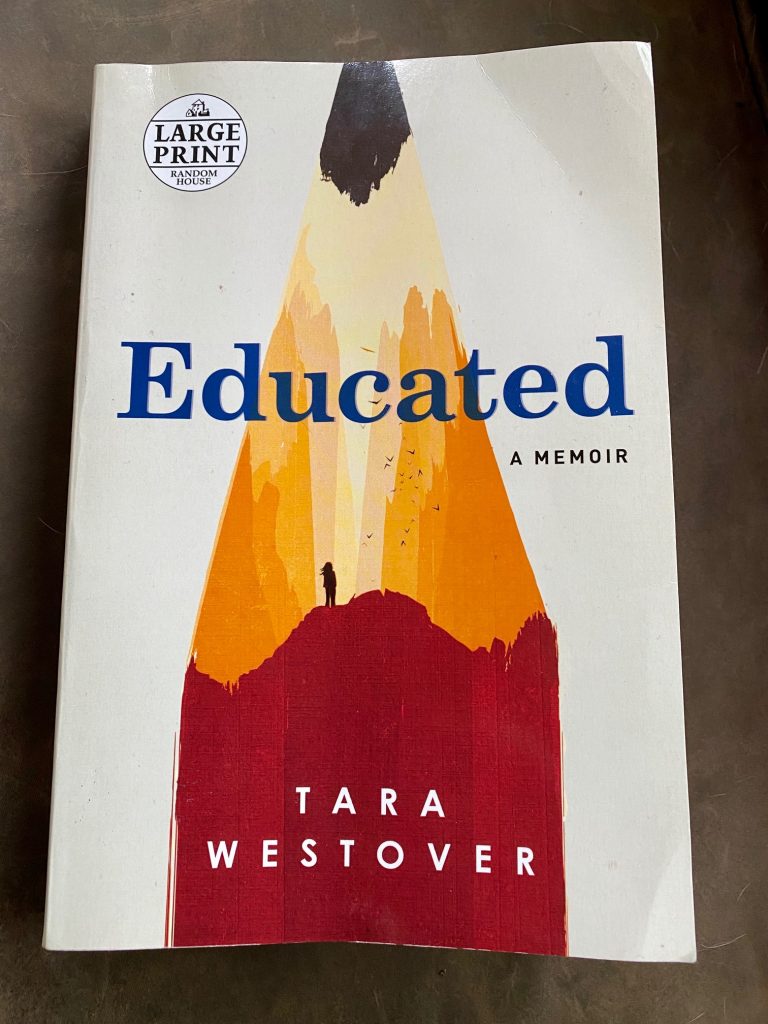 Tara Westover is such a talented writer that the Prologue gives me chills. “I am only seven…Four of my parents’ seven children don’t have birth certificates. We have no medical records because we were born at home and have never seen a doctor or nurse. We have no school records because we’ve never set foot in a classroom…At this moment, according to the state of Idaho and the federal government, I do not exist.” I’m in. I’m hooked. And the story has barely begun.

Educated is so descriptive and the storytelling is so rich it’s hard to decide where to start with this review. Westover’s wackjob Mormon parents (I will not call them “survivalists” because I feel that’s too nice) allow her to go to Sunday School but not actual school. Her mother tries to homeschool to no avail since her father doesn’t want her learning anything from a book. She eventually reads books but hides them. “In retrospect, I see that this was my education…The skill I was learning was a crucial one, the patience to read things I could not yet understand.” While Westover’s intelligence is undeniable, her father describes college as “extra school for people too dumb to learn the first time around.” I don’t have enough eyes to roll.

Throughout the book, the reader learns that her father is outside of his mind and thinks the government is coming for the entire family. So, he makes each of them constantly prepare for the “End of Days”which entails hoarding food and various supplies. His kids should be in school, but instead they are throwing around scrap in his dangerous (understatement of the year) junkyard. The house doesn’t have a phone, the cars are neither registered nor insured, and no one wears seatbelts or uses soap. What the hell is happening here. Westover later figures out that her dad is bipolar and that “the same paranoia that was a symptom of the illness would prevent its ever being diagnosed or treated.” But his personality disorder goes way beyond paranoia – a lot of what he says to her is misogynist and completely out of line to say to anyone, nevermind his own daughter. What’s worse is he is frivolous with the lives of his family members because he believes God will handle everything. I can’t.

Over the course of Westover’s childhood, her dad almost kills most of the people in the family several times, including himself, due to negligence and deluded ideals about how he thinks the world works. Even though three of the accidents result in serious brain traumas, he never learns. Instead, he repeatedly puts his family at risk. While it is horrifying to read about Westover’s various injuries, sad to read that she feels like she belongs for the first time when she is finally allowed to take a dance class, and despicable to learn that her father calls her a whore when she wears anything above the knee or below the neck, the abuse doesn’t end there. Her violent older brother Shawn physically abuses her throughout her childhood – violent acts committed over and over that her parents ignore and then later refuse to believe. Conversely, her older brother Tyler encourages her to leave because home is “the worst possible place for her” and, of course, he is right. Before Westover gets herself out of the looney house she is raised in, she had “never learned how to talk to people who weren’t like us – people who went to school and visited the doctor. Who weren’t preparing, every day, for the End of the World.”

Westover’s mother is more complicated because she has some redeeming qualities like encouraging her daughter to get out of their small town but making sure her father doesn’t know she said it. But then there is the part where she thinks Westover is “at least twenty” when she is actually sixteen years old. Not knowing the age of her own daughter is a hard-hitting realization but then again, her lack of awareness could have been a result of the massive brain injury caused by her husband’s complete lack of rationality.

Thanks to Tyler, Westover finally escapes her family when she passes the ACT and gets into college. While in school, she writes about bipolar disorder and realizes that while disease is not a choice, she is angry at her father rather than sympathetic because she, her mother, and two brothers were forced to survive horrific physical traumas because of him. “We had lived in a state of alert, a kind of terror…Dad always put faith before safety…and it was us who paid.”

In Part Two, she blatantly says: “I don’t understand why I wasn’t allowed to get a decent education as a child.” To this day she doesn’t have a GED or a high school diploma but she has as PhD. Despite everything, she became Dr. Tara Westover. Clearly perseverance got her to where she is today – a best-selling author for example – but it took years for her to get past the guilt and shame her family made her feel. When she brings home a boyfriend to Buck’s Peak (not sure what she was thinking) I laughed out loud when he says, “Is this place for real?” Any sane person she brought home would have had the same reaction.

Towards the end of the book, there is also a point where she shifts from referring to her parents as “Mother” and “Dad” to “my mother” and “my father” which signifies her finally removing them from whatever pedestal they made her believe they should be on. The mental breakdown she suffers due to her family’s refusal to believe her about her brother’s violence is tough to read. She says she felt like there was “nothing to grasp…only shifting sand, shifting loyalties, shifting histories.” They repeatedly make her feel like the crazy and reprehensible one when these people are some of the most horrific humans I’ve ever read about.

When she attends a family funeral she looks around at her siblings, half of which she’s estranged from, and realizes that three who left the mountain have doctorates and the four who stayed didn’t finish high school. That says it all. It takes her a long time but she is able to untangle herself from her former life and former self. She lets go of the undeserved guilt and shame her parents put on her throughout her entire childhood and becomes the person she is meant to be.

My only criticism of the extremely brave and well-written Educated is that the Author’s Note provides a disclaimer that the book is not about Mormonism, yet I feel that there is endless talk about Mormonism. Other than that aspect, Educated confirms one of the many reasons I read nonfiction – because truth really is stranger than fiction. Her memoir digs deep into all the large and small moments of her past as she pieces together how she got out of the dirt and into the classroom.

Examples of Tara’s incredible writing and her insane upbringing:

“To look at her was to take a step back.”

“He was weatherworn inside and out.”

“Dad lived in fear of time. He felt it stalking him.”

“He looked something between homeless and on vacation.”

“In September the Twin Towers fell. I’d never heard of them until they were gone.”

“The mountains were as unfamiliar and menacing as ever.”

“Never again would I allow myself to be made a foot solider in a conflict I did not understand.”

“It’s strange how you give the people you love so much power over you.”

After refusing grants over and over again, she finally accepts them which allows her to focus on what her texts books say rather than how she is going to pay for them: “I began to experience the most powerful advantage of having money: the ability to think of things besides money.”

About her father: “Why did you fight so hard against made-up monsters, but do nothing about the monsters in your own house?”

“I decided to experiment with normality.”

When her parents visit her at Harvard: “The mere fact of them had never shocked me before.

When her mother starts making money with her crazy concoctions: “Dad was on track to become the best-funded lunatic in the Mountain West.”

“I could admire the past without being silenced by it.”

“It is as if I wrote in order to forget.”

“I saw an unhinged old man, literally disfigured by his beliefs.”

“Who writes history? I thought. I do.” Good for her. This book is an incredibly written act of bravery. I’m looking forward to seeing what’s next from Tara Westover.