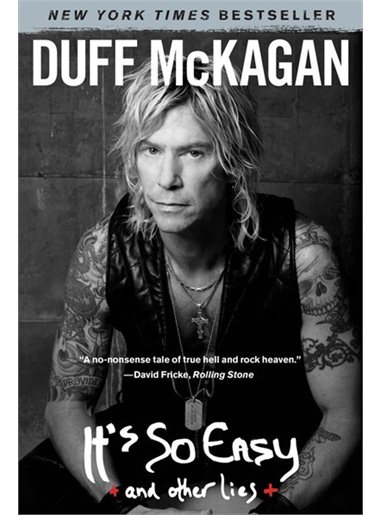 Of course I read another book written by a Guns N’ Roses band member! Almost a year ago (January 2017), I reviewed Slash and I enjoyed it so much I thought I’d read Duff McKagan’s version of the story as well. While I liked Slash’s book, my two main criticisms were that a) it was too long (over 450 pages) and b) there was way too much discussion about his alcohol and drug use. As I cracked open McKagan’s tale, I was hoping that he would handle those two issues differently than Slash and he did.

Over 100 pages shorter, It’s So Easy And Other Lies is an honest story of redemption about a guy who came from a large, Seattle family and found himself in the biggest rock and roll band on the planet because he wanted it more than anyone else. While there is plenty of discussion about his alcohol and drug use, McKagan is very careful not glamorize any of it. In fact, one of the book’s main themes is how detrimental it was to lose so many people throughout his life to heroin overdoses. But it didn’t stop him from doing it.

Another thread that appears throughout the narrative is his appreciation for people who “believed in his bands.” He mentions those people countless times and it’s clear that, regardless of the severe panic attacks that played a role in his substance abuse, he understood that it takes a village of believers to make rock and roll bands happen. In fact, his 1993 Geffen-released solo album is called Believe in Me.

Throughout the book, readers also gain a clear understanding of the important role family plays in McKagan’s life – especially his mother who he was extremely close with until her death in 1999. He speaks fondly about his siblings, aunts, uncles, childhood friends, his dog Chloe (who was by his side for literally everything), and, of course, his wife and two daughters. Additionally, after getting sober, exercise and education became priorities. Actually they could be more accurately characterized as healthy addictions. I saw none of that coming.

What I found to be the most interesting overall aspect of this book was that it showcases someone who could have been one of the biggest assholes in rock and roll history but chose not to be. Instead, he decided to be a humble guy who went through many extreme stages of life. He also avoided becoming a rock and roll cliché when, after being hospitalized and near death as a result of his alcohol and drug use, he seriously turned it around. As a result, Duff McKagan has worn and continues to wear many hats: musician, addict, exercise enthusiast, son, brother, husband, student, and father.

We saw Guns in August and the show was amazing. Three hours of incredible rock and roll. We decided that McKagan looked the best out of everyone and sounded great – even when he sang a Misfits song that no one saw coming.