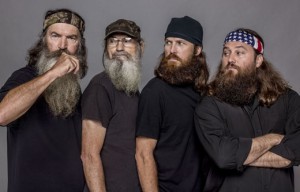 Apparently, until yesterday, everyone and their mother had seen the show Ducky Dynasty except me. For some reason over the last few weeks people have been consistently mentioning the show and after seeing numerous Facebook posts about it I decided it was time to watch a few episodes. My first reaction was, “Are you kidding me? This is what people have been obsessing over? A bunch of hunter dudes with huge beards dressed in camo?”

However, upon closer inspection and three episodes later, I started to figure out what all the commotion was about. First of all the fact that the theme song is ZZ Top’s “Sharp Dressed Man” is hilarious. Then, during the opening credits, when these guys step out of a car with suicide doors wearing custom camo blazers you can’t help but think, “You can’t make this shit up.”

But let me back up for a minute. For the six people out there (there were seven, but now that I’ve watched the show it’s six) who haven’t seen Duck Dynasty it’s a reality television series on A&E that highlights the lives of the Robertson family who became wealthy as a result of their family-operated business, Duck Commander. Located in West Monroe, Louisiana, Duck Commander makes products for duck hunters, primarily the duck call named Duck Commander, which family patriarch Phil Robertson invented in 1973. The product became the gold standard duck whistle among professional hunters.

The Robertson men, brothers Phil and Si, and Phil’s sons Jase, Willie and Jep, are the main characters of the show along with their impossibly hot wives. Phil is about as interesting of a character you could hope for on a reality show. He attended Louisiana Tech where he was the starting quarterback and star of the football team. He was so good that he started ahead of future NFL hall of famer Terry Bradshaw and could have had a future playing pro football but declined because he didn’t want to miss duck hunting season. Obviously. During the 10-week duck hunting season, Phil has a tradition of not showering or shaving ever to bring him luck. I mean you couldn’t write a character like that – truth really is stranger than fiction!

After watching a few episodes I kept thinking that the show was a backwoods version of Pawn Stars in that it’s a family owned and operated business that makes a ton of money doing something random. But then it was pointed out to me that the Robertson family invented something that was a game-changer in the duck hunting business rather than just running a business that deals with buying and selling other people’s stuff. Now in its third season, Duck Dynasty has become a fan favorite and these one-liners are an example of why:

“Sorry dude, I beard-dialed you…”

“When you don’t know what you’re doing it’s best to do it quickly.”

Because the family is part of such a unique niche business, it’s also funny to watch these people live in luxurious doublewide trailers instead of houses even though they are worth millions of dollars. Clearly they know they have an amazing, sought-after product but it’s like they need to “keep it real” by living in trailers. It’s also funny that we are constantly reminded that Willie is the CEO of the company – like that really matters. What’s even funnier is when you see photos of these guys without beards – they look more like frat boys than backwoods kids!

Don’t get me wrong – it’s way more fun that they have these gnarly beards and dress the part in all their camo gear. I just get a kick out of what constitutes as reality TV these days, how truth really is stranger than fiction and how families create enough drama on their own. I’m thinking the writers/photographers could arguably take a nap while the Robertson clan talks to each other on camera and I’d watch the Robertson family over the Kardashian nutjobs any day.