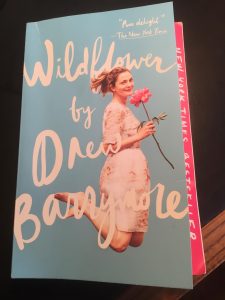 When deciding whether to not to read a book about a celebrity or public figure in the technological age that is 2016, one might ask: Will the book provide any new insight by telling fresh stories that are worth reading or will it contain old stories rewritten with a different cover?

Anyone who has paid attention to Drew Barrymore over the years knows she came from acting royalty, had absentee parents, was the little girl in E.T., went to rehab as a teenager for drug and alcohol abuse, and was engaged and married more times than she’d probably like to admit. But then, as an adult, she pulled it together and has been in hugely successful movies like Charlie’s Angels, The Wedding Singer, and Fever Pitch, and has become a businesswoman, entrepreneur, and philanthropist.

In 1990, at the age of 15, Barrymore published a tell-all book called Little Girl Lost which chronicles all the mistakes, wild parties, and substance abuse she had endured up to that point. Although I haven’t read it, I’m sure it’s as captivating as it shocking, especially since she was so young when it was published. Who knows why she thought it was a good idea to write something like that – clearly she lacked parental direction and maybe needed the money. Who knows.

Now, 26 years later, she has published another book called Wildflower which is written by a different Barrymore: a 40-year-old actress and businesswoman who is married with two children. If readers are expecting a crazy tell-all they’ve picked the wrong book. That being said, I enjoyed reading Wildflower as I could hear Barrymore’s voice through her unapologetic, funny, and adventurous anecdotes. Her self-awareness is inspiring and her willingness to point out her own flaws is humble without being self-deprecating.

Throughout the book, Barrymore’s most prominent themes are the importance of feeling safe, how flowers have always played an important role in her life (her production company is called Flower Films and the name of her cosmetics line is Flower Beauty), and her yearn to create a family of her own through friends like Cameron Diaz, business partners, and ultimately her husband and two daughters. Barrymore does talk about her parents’ inability to take care of her which led to emancipation at age 14, being institutionalized, dealing with being a “washed up former child actor,” and her many travels around the world, but none of them sound as treacherous as they probably were. Looking back at teenage mistakes as an older person can be entertaining or horrifying and Barrymore clearly took the former route with this book.

My favorite stories are about Adam Sandler, who she describes as her “cinematic soul mate,” and about the monumental role her dogs played in her life. Barrymore talks with so much love about her first girl Flossy being her partner in all things, and then Templeton and Vivian, and how these three pups guided her through her twenties. “They were such a part of my identity and lifestyle,” she says. I 100 percent relate to how Barrymore learned so much from them. “They balanced my life and grounded me in every way.” I hear you Drew.

Some of the chapters were a little odd – like when she writes about being on a cruise ship to Istanbul and the Mediterranean with her friend and friend’s mother and how inappropriate she was throughout the entire trip. Not sure what the point was, but I did get a kick out her describing her hippie dippy outfits and the sticker and sharpie-decorated boom box she carried around with her. Additionally, the chapters about her husband, daughters, and in-laws – although interesting and beautifully written – seemed more like love letters to them than anecdotes for the reader.

For those who are fans of Barrymore and/or fans of reading real stories about real people pick up Wildflower – she’ll definitely make you laugh and might tug a heart string or two.