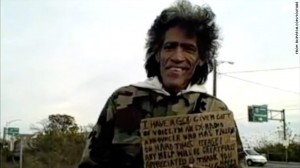 By now I’m sure everyone has seen or at least heard about the homeless man with the golden radio voice but if you haven’t here is a quick recap:  Two days ago a reporter from the Columbus Dispatch (in Columbus, Ohio) went to a street intersection and filmed Ted Williams, a homeless man holding a sign about his natural radio voice.  The handwritten sign read: “I have a God-given gift of voice.  I’m an ex-radio announcer who has fallen on hard times. Please! Any help will be gratefully appreciated.”

The reporter conducted an interview on the spot that began with him saying something along the lines of: “You’re going to have to work for your money, say something to us in your radio voice.”  Williams, who was wearing a fatigue jacket and was sporting mangy hair and crooked teeth, was happy to oblige and what came out of his mouth was shocking.  Not only does he have the perfect radio voice but also the perfect sports announcer voice, television commercial voice, etc.  You name it, this guy can sell it.  It was unbelievable.  When asked how he ended up on the street Williams confessed that drugs and alcohol took their toll but that he’s been sober for two years.  For such a haggard looking man he was both kind and charming.  I found myself rooting for this guy from the minute he came on my computer screen.

As my friend Justin Reed said, watching this video was kind of like watching the clip of Susan Boyle on the now famous episode of Britain’s Got Talent when everyone (including Simon Cowell) laughed at her until they heard her killer voice.  That audience was left feeling ignorant and superficial for laughing at a woman just because she was older and plain-looking and I’m sure the same happened with people who initially saw the photo of Williams.  Then, just like with Boyle, the video of Williams went viral on YouTube reaching more than four million views in 24 hours.   And also like Boyle, Williams was able to benefit from this clip as he now has job offers from the Cleveland Cavaliers and Quicken Loans Arena which are offering him voiceover work in radio and television.  Apparently, Williams is also sorting through numerous opportunities for other appearances on national TV and radio, which could result in further offers in the days to come.

Either way the video of Williams should remind us of two things: 1) Don’t be another ignorant person who judges someone by their appearance.  2) The Internet, specifically YouTube, can do amazing things.