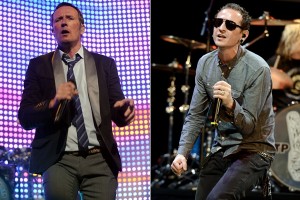 Although Stone Temple Pilots is hitting the road this summer, notoriously troubled former frontman Scott Weiland will not be joining them because he has been replaced by former Linkin Park singer Chester Bennington. Instead, Weiland, no stranger to band switching (i.e. Velvet Revolver with Axl’s old crew) is touring with his band the Wildabouts through August.

It’s always interesting when bands replace their lead singer because the reaction is either really positive or horribly negative. Five examples of frontman replacements:

Judas Priest –This story is so good they made a movie out of it called Rockstar with Mark Wahlberg! In 1992 Judas Priest frontman Rob Halford officially left and after a five-year hiatus, the British band returned after hiring Tim “Ripper” Owens whose only experience was as the singer of a Judas Priest tribute band. Even though Ripper did a good job of replicating Halford and fans definitely ate up his Cinderella story, the two albums he was on did not do well. Returning to the band in 2003, Halford helped Priest make a successful comeback, while Ripper had a short stint with metal band Iced Earth.

Alice In Chains – Lead singer Layne Staley‘s frequent drug problems kept the band out of the recording studio and the spotlight in the second half of the 90s and after his death in 2002 (of an apparent drug overdose) it seemed that the band was finished making music. Then in the mid-2000s, the surviving members reunited for several benefit concerts featuring guest vocalists, including Comes With The Fall singer William DuVall, and things were back on track. DuVall went on to permanently front the band for their 2007 tour and will head into the studio with the band to record a new album. So far the fan reaction to DuVall has been positive.

Journey – For much of the 1970s, Journey’s lead vocals were shared by singer Steve Perry and keyboardist Gregg Rolie but after Rolie’s departure came 1981′s Escape which had three Perry-sung chart toppers, “Who’s Crying Now?,” “Don’t Stop Believin’” and “Open Arms.” These monster hits cemented Perry as the voice of the band, but by 1987, success had gone to Perry’s head and he left Journey for a solo career. The band did eventually reunite, but as they were to go on tour in 1997, Perry injured himself and couldn’t perform. Eventually, Journey went on tour without him, getting Steve Augeri, who looked and sounded just like Perry, to front the band. Fans were divided on their opinions of the new lead singer but Augeri continued on with Journey until 2006 when chronic throat infections forced him to quit the band. Jeff Scott Soto filled in for a time and now tribute band singer Arnel Pineda is the frontman.

Mötley Crüe – The kings of 80s hair metal were definitely Mötley Crüe. Fan ate up their fast and loud songs like “Shout At The Devil,” “Wild Side” and “Girls, Girls, Girls,” among others. But with the 90s came constant fights between lead singer Vince Neil and drummer Tommy Lee, which lead to Neil’s 1992 departure. Determined to keep the band going, Crüe enlisted John Corabi for their next effort, their 1994 self-titled album. Unfortunately, though Corabi had talent and could play guitar for the band too, he neither sounded like the high-pitched Neil nor looked like the band’s platinum-blond former singer. Clearly fans didn’t like the lineup change because the album with Corabi bombed so badly that its support tour was canceled. By 2004, the four original Crüe members put aside their differences to make a successful comeback and the band is still touring.

Van Halen – Anyone who is a rock fan has had the Van Halen/Van Hagar conversation. Why? Because after the band’s hugely successful 1984, which included songs like “Jump,” “Hot For Teacher” and “Panama,” lead singer David Lee Roth quit, leaving the remaining three members in a lurch. The band ended up hiring solo artist Sammy Hagar, who not only sang, but could play guitar for live shows and did know how to work the crowd. The problem was that Hagar sang differently than Roth and definitely looked nothing like Roth. But while VH lost much of its old following, they gained a whole new following with fans who liked music that had elements of both pop rock and hair metal. And as with their Roth albums, the Hagar years saw all multi-platinum albums. In 1996, after Hagar came to verbal blows with Eddie Van Halen, the band hired Extreme singer Gary Cherone to work on Van Halen III which did horribly leaving the band on hiatus until 2007 when Van Halen officially reunited with Roth for a world tour that’s still raging.

It will be interesting to see what kind of reception Chester Bennington receives from STP fans. Will they obsessively compare him to Scott Weiland’s swagger and always think of him as another’s band lead singer or will they just be happy to have someone that shows up? Good luck Chester! You’re not in Linkin Park-ville anymore Toto!