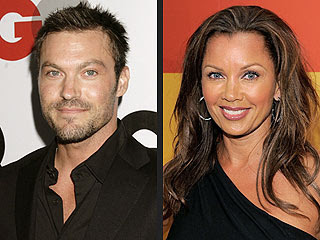 Thanks to some new blood, ABC’s nuttiest show is reminding viewers why they began watching it in the first place. Although many characters have come and gone since Desperate Housewives premiered in 2004, the two newest characters to appear on Wisteria Lane have caused quite a stir. 90210 alum Brian Austin Green plays Keith, Bree’s hot carpenter, while singer/actress Vanessa Williams plays Renee, an old college friend of Lynette’s. And both of them are bringing the heat. With his tattooed arms and abs that could be a character themselves, Green has come a long way from the David Silver days. And Bree has a crush on him which is even better – I love that he’s bringing out her inner-cougar. Speaking of cougars, Williams’ character is going through a divorce from a New York Yankee and is on the prowl. She’s ridiculous and hysterical which is why I’m having trouble wrapping my head around the fact that she is the woman responsible for singing “Colors of the Wind” from the movie Pocahontas.

Welcoming the new blood to the neighborhood are vet stars Teri Hatcher as Susan Meyer, Felicity Huffman as Lynette Scavo, Melrose Place alum Marcia Cross as Bree Van de Kamp and Eva Longoria Parker as Gabrielle Solis. Susan has recently moved off of Wisteria Lane due to money issues, Lynette is dealing with a new baby and Renee moving across the street, Bree is busy trying to get busy with Keith and Gaby is dealing with the devastation of finding out that her eight year old daughter isn’t really her child.

While the show follows the lives of these of women, it has always really been about secrets and scandals. The Wisteria Lane women seem to live in a perfect suburban neighborhood but behind closed doors they deal with domestic struggles and the ups and downs of family life. Each woman has a very distinct personality and they are all very different. Over the years they have most definitely evolved into more likeable people – especially Gaby and Bree – and they have had storylines that were at times extremely unbelievable. That being said, this season has been very exciting and rather than focusing on crazy storylines the writers have decided to make these women more human by dealing with issues that are real and very serious.

I’m interested to see what kind of history Lynette’s husband Tom (Doug Savant, another former Melrose Place actor) has with Renee, what happens when Gaby and her husband meet the girl who is actually their daughter and of course what comes of the flirtation between Bree and Keith. I haven’t been excited for the next episode of Desperate Housewives is a long time and I think it says a lot about a series that has been on the air for six years. At 8 p.m. tonight I’ll definitely be watching.