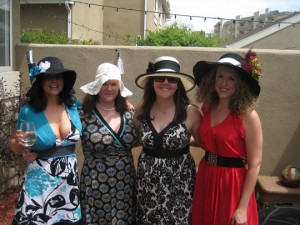 Why is celebrating the Kentucky Derby such a big deal?  Although it’s known as the “Greatest Two Minutes in Sports” I feel like it’s such a random event to celebrate.  But don’t kid yourself- we celebrated this year!  For the first time ever I attended the famous Denver Derby Party which has taken place at the Botanic Gardens in the past and has always sold out very quickly.  Celebrating its 10th anniversary this year, the party moved to Infinity Park and sold out weeks before the event – boasting close to 5,000 attendees.  Featuring live band Super Diamond, special guest DJs and the best people watching I’ve seen in a long time, the Derby Party was the place to be this weekend.  The hats, the dresses, the mint juleps, the seersucker suits and the fact that it was 80 degrees and sunny made the party something to talk about.  The only downside is that the party’s reputation precedes itself in that it is quite the drinking fest – I definitely saw a few people literally falling down and being attended to by very patient and helpful cops and paramedics.  Nothing too serious – just way too much booze.

What’s funny is that the party was five hours long and the race, as we know, is only two minutes.  So why is this event such a big deal?  Is it the allure of watching and betting on those magnificent Thoroughbreds or is it the dressing up in fun and interesting outfits?

On the sports side, the Kentucky Derby is probably the most anticipated horse race in the U.S. season.  It is a Grade I stakes race for three-year-old Thoroughbred horses, held annually in Louisville, Kentucky on the first Saturday in May, capping the two-week-long Kentucky Derby Festival. The race is one and a quarter mile at Churchill Downs and is the first leg of the United States Triple Crown of Thoroughbred Racing.  It is followed by the Preakness Stakes and then the Belmont Stakes. A horse must win all three to win the Triple Crown. The attendance at the Kentucky Derby ranks first in North America and usually surpasses the attendance of all other stakes races including the Preakness Stakes, Belmont Stakes and the Breeders’ Cup.

This year Animal Kingdom was the winner of Kentucky Derby 137 – a horse that no one expected to pull out the title.  Was watching the race at the Derby Party exciting?  Absolutely.  But I wonder how many attendees actually remembered who won – or for that matter I wonder how many remembered the number of mint juleps they drank?  Either way, the party was something to see and I’m glad I got to be a part of it.  Seeing everyone dressed up was really fun and wearing a big hat was fun as well.  I guess the allure was just being there – and celebrating the brilliance that is Kentucky Derby horses.