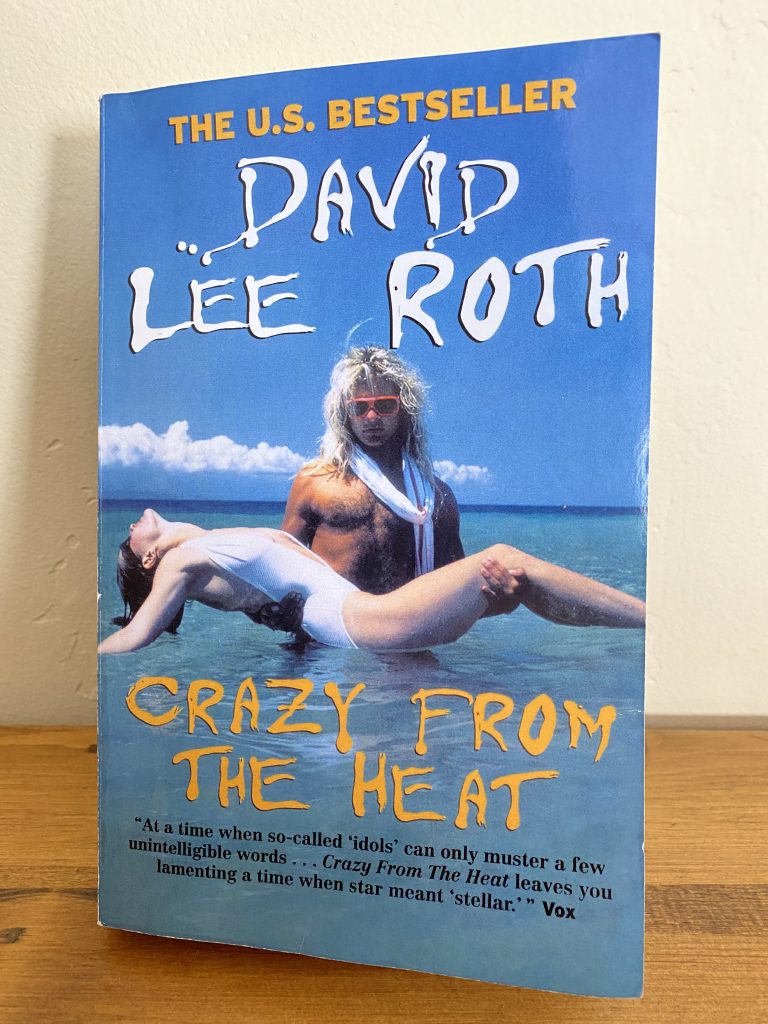 Named for his 1985 solo EP, Crazy From The Heat, David Lee Roth’s memoir is the epitome of stream of consciousness writing. Comprised of stories starting with childhood through then-present day (1997), the book is sort of linear but more of a vignette format. Roth writes like he talks – he’s all over the place but makes solid points and intelligent observations. Some of his stories are over the top and unnecessary, while others are extremely entertaining which, from someone less talented, wouldn’t be worth reading. But Roth is one of the best frontmen I’ve ever seen live and his five-octave vocal range will be enjoyed by Van Halen fans for the rest of time. But back to the book.

The timing of Crazy From The Heat is interesting because when it was written Roth wasn’t with Van Halen – a fact he makes abundantly clear as he spends a lot of time defending his solo recording decisions, describing heated conversations he had with “Edward” Van Halen, and explaining why it took the band so long to record albums like 1984 and Fair Warning. As a reader, I was looking for more background about the Van Halen catalog but instead the book focuses more on Roth’s adventures and misadventures. That being said, he explicitly states that this book is not meant to recount chronological events – instead, it’s Roth telling stories and explaining why and/or how he did the things he did. He also clarifies that stories are where the music came from and that “the music always came first.”

Overall, the U.S. bestseller is a fun read. Some of what Roth says is funny and eccentric while other anecdotes made my eyes roll into the back of my head. One of my favorite stories he tells is when he ends up in the emergency room after smashing a guitar on stage and catching some of the shrapnel in his eye and passing out. He wakes up in a hospital bed and sees that the nurse, who didn’t recognize him, wrote “circus performer” under the occupation section of the form. Solid gold. Additionally, he consistently mentions that his mother gave him an appreciation of reading that made him a constant reader as a child and adult. Of course, I love that.

Stories that he could have skipped (or at least shortened) were the long, drawn-out descriptions of his many vacations to exotic places like Thailand and New Guinea. We get it Dave – you love to travel and have been all over the world. What about the music? I do appreciate that there was very little mention of drug and alcohol abuse because Slash’s book went on and on and on and on about all of that and it got really old. I’ve read a lot of books about my favorite jukebox heroes and I’ve learned that just because I like the person’s music doesn’t mean I will like the person. David Lee Roth is definitely a study in liking the person’s music but not necessarily liking the person. That being said, I’ll never forget seeing Van Halen live in 2008 and 2012. Also, our son’s middle name is Halen so there has always been and will always be a connection.

“I know the floorboards of every major arena, stadium and venue in the free world.”

“My dad always taught me to ‘stay cool.’ Mom always told me ‘You can do it.’”

“It’s hard to know when you’re in an era until it’s over.”

“Precious moments could be lost while you’re searchin’ for the right song.”

“Production was always a part of Van Halen, that it would look like it sounded.”

“My physical and emotional peak has to be right around 9:15 p.m. and that includes on a Tuesday night.”

“You must have…something to talk about; you must have some life experience, some kind of mileage, academically or otherwise.”

“I’ve always communicated the most thoroughly, physically. It’s a big part of the reason that Van Halen defied the language barrier.”

“You’re only as big as what aggravates you.”

Until Roth was five years old he had to wear braces on his legs. Understandably, as soon as he got those off, all he wanted to do was run and jump. That never changed.

As a kid, Roth was repeatedly given a hard time for being Jewish. But he learned to sing in Sunday school, Hebrew school, and confirmation class. “I am waterproof. Nobody drowns me out.”

The first albums he bought (not shoplifted) were by CCR and Blood, Sweat and Tears – but he didn’t specify which ones.

Roth met the Van Halen brothers at a backyard party. They were playing guitar and drums in another band called Mammoth while Roth was fronting a band called Red Ball Jets.

From the beginning, Roth wanted to play rocks songs people could dance to.

Van Halen started playing at the Whisky-A-Go-Go in 1975.

When his grandmother attended Van Halen shows, she would only stay for three songs because “she was afraid that the sound was gonna break her bones apart.”

When Van Halen earned its first gold record, they were on tour with Black Sabbath.

“Just Like Paradise” was requested to be the theme song for Beverly Hills 90210.

In 1983, Van Halen headlined the U.S. Festival in San Bernardino, California. They performed on “Heavy Metal Day” for $1.5 million and, as a result, The Guinness Book of World Records created a new category just for them: the highest paid single appearance of a band.