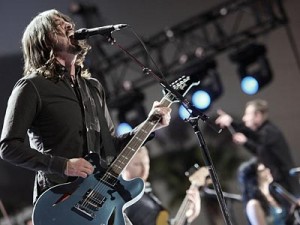 Last night I went to my second Foo Fighters concert and like the first one it was nothing short of amazing.  Taking place at the Pepsi Center rather than Red Rocks, last night’s show was a different experience for sure.  Although Red Rocks is clearly an iconic venue, Pepsi Center allowed for a more arena rock show experience which was a lot of fun.  Even Grohl kept saying how they were there to put on a rock and roll show – and did they ever.  It was almost three hours long and the energy never stopped.  Once again it was clear that Grohl loves what he does as he continuously sang, talked and ran around the stage and through the crowd, all while wailing on his guitar.  You can take the kid out of the punk rock band but you can’t take the punk rock out of the kid.

For those who don’t know, Dave Grohl was the drummer in Nirvana making him part of arguably one of the most influential bands in the history of music.  Nirvana’s Nevermind turned 20 years-old on September 24 (yes, I feel old too) and it’s amazing to think that the drummer of that band is now one of the most charismatic and talented front men and lead guitarists I’ve ever seen.

A little background on the Foo Fighters:  Originally formed in 1994 as a one-man show following the dissolution of Nirvana, Grohl named the band after the UFOs and various aerial phenomena that were reported by Allied aircraft pilots in World War II, which were known collectively as foo fighters.  The band started out as just Grohl doing his thing and went through many lineup changes during the 90s. After the Foo Fighters’ 1995 debut, Foo Fighters, other band members were brought on including drummer extraordinaire Taylor Hawkins who is most definitely Grohl’s partner in crime.   Over the course of the band’s career, they have won six Grammys and have been nominated 19 times.

Wasting Light is so good that it just might garner the most singles of any Foo Fighters album to date.  Do yourself a favor and download: “Bridge Burning,” “Rope,” “Dear Rosemary,” “I Should Have Known” and “Walk.”

I love that over the years Dave Grohl and the Foo Fighters have never sold out and have not lost their edge.  I also love that they play the songs people want to hear – no prima donna bullshit with this band.  Since Grohl was in a punk rock band that people liked so much that their music was thought of as being borderline pop rock, it makes sense that he still has long hair, dresses in all black and has Cobain tendencies when he plays guitar.  Not only can Grohl play his instrument well but he has a set of lungs that are unmatched – like he said last night he’s been screaming for 20 years – and he still sounds so good.  His raspy voice is so full of energy and vigor that it’s almost shocking when he slows it down.  When he is on stage you hear a real talent who just so happens to be able to hit enormous volumes when he feels like it.

Dave Grohl is the real deal – when he is eligible for the Rock & Roll Hall of Fame in 2020 he will be inducted.  No question.  Anyone who can play drums, play guitar and sing for two hugely successful bands in one lifetime is a force to be reckoned with.  If Grohl isn’t a force I don’t know who is.