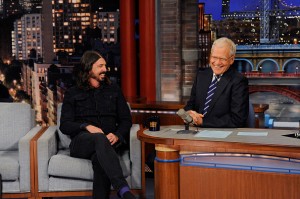 Although Dave Grohl has been taking over the world for a while now, here is the latest:

Sound City – Released in February 2013 and created by Grohl, Sound City is a documentary about the history of renowned Los Angeles recording studio Sound City Studios – the place where legends recorded their most legendary albums. In fact, Nevermind was recorded there and before the studio closed in 2011 Grohl purchased several items including the mixing console and a rare analog model. An album called Sound City: Real to Reel was also released and features guests such as Stevie Nicks, Rick Springfield and Paul McCartney, among many others.

Sonic Highways – Counting down the days until November 10! Foo Fighters will release their eighth studio album called Sonic Highways which is comprised of eight songs recorded in eight different cities: Austin, Chicago, Los Angeles, Nashville, New Orleans, New York, Seattle, and Washington, D.C. But before the album is released, HBO will debut a series of the same name this Friday which chronicles the band’s tour de America with interviews by icons like Willie Nelson, LL Cool, Bonnie Raitt and Dolly Parton, among others. In the trailer, Grohl describes this effort as a love letter to the history of American music.

Residency on the Late Show With David Letterman: In support of their HBO series, the band is spending this whole week playing music with various collaborators which so far has included covering Black Sabbath’s “War Pigs” with Zac Brown and playing “Kick It Out” with Heart.

Letterman’s reaction: “Good God, we should do this every night!”

Ya think? Lucky you Dave that the rock and roll Dave decided to bring his awesome band on your show this week. I can’t image how the ratings are skyrocketing.