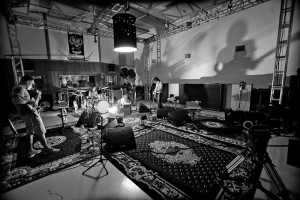 What the hell would we do without Dave Grohl? Seriously. This guy is so talented and has his brilliant musical hands in so many different things that if he didn’t exist we’d be in trouble:

Nirvana – He played drums for one of the most influential bands of our generation. Although they weren’t around for very long Nirvana has sold 75 million records worldwide.

Foo Fighters – He sings and plays lead guitar for one of the best and most fun-to-see-live rock bands ever. Since their inception in 1995 the band has won 11 Grammys.

Them Crooked Vultures – Grohl plays drums for the rock & roll super group which also includes John Paul Jones (Led Zeppelin) and Josh Homme (Queens of the Stone Age). The band’s first single “New Fang” was released in October 2009 and in 2011 the group won a Grammy for Best Hard Rock Performance.

Another aspect of Grohl that I really like is that he has the ability to be current and old school at the same time. He is constantly finding innovative ways to make music but also pays homage to rock & roll history. And most recently, in addition to being able to sing and play two instruments, he made his debut as a film director.

Released this month, Sound City is a documentary about the history of renowned Los Angeles recording studio Sound City Studios – the place where legends recorded their most legendary albums. In fact, Nevermind was recorded there and before the studio closed in 2011 Grohl purchased several items from the studio including the mixing console and a rare analog model.

Known as America’s greatest unsung recording studio, Sound City was where artists such as Fleetwood Mac, Neil Young, Rick Springfield, Tom Petty, Metallica and Nirvana all went to make music history. Featuring interviews and performances from those iconic musicians, Sound City tells the story of why a studio surrounded by rundown industrial warehouses was so special. In the film, Grohl gathers some of rock’s biggest artists to collaborate on a new album.

The film was first exhibited in the 2013 Sundance Film Festival on January 18, 2013 and was released to select theaters on February 1, 2013. Do yourself a favor and check out how, using Sound City’s legendary analog console, these artists added a new chapter to rock & roll history.