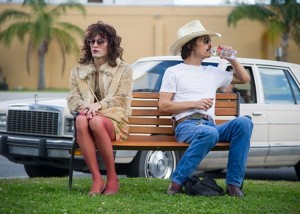 I finally saw it. After months of reading rave reviews, watching clips, listening to positive word of mouth comments and witnessing both Matthew McConaughey and Jared Leto winning Oscars for their performances it was time to watch the film in its entirety. What took me so long? I don’t know. I guess these days carving out two hours to watch a movie is harder than it sounds and honestly I’m not always up for sad movies.

But this was so much more than just a sad movie.  Instead it accomplished something that can be very difficult when telling a story about characters who are unsympathetic. How do you get an audience to sympathize with one person that is a gambling-racist-homophobic-womanizer and another who is a kind soul but severe drug addict? You hire two of the most talented and ballsy male actors in the game, make them each lose so much weight that they become skeletor versions of themselves. And, most importantly, you get performances out of them that are so good you believe that they are actually the people they are portraying.

At this point everyone knows the premise – Dallas Buyers Club is the story of Ron Woodroof that takes place in the 80s in the middle of the HIV/AIDS epidemic when very little was known about the disease and most people thought only gay people could contract it. When Woodroof finds out he has it and is given 30 days to live he does whatever it takes (mainly smuggling unapproved pharmaceutical drugs) to stay alive. He also literally goes to the ends of the earth to help others who are not responding to AZT – including Rayon the transsexual AIDS patient he meets in the hospital.

Although Woodroof was ignorant in a lot of ways, he was also so determined to live that he went to the library, fired up the microfiche and did his research. By starting the Dallas Buyers Club he was able to avoid jail on a technicality by giving patients the drugs for free but charging a monthly club membership. In order to pull it off he needed Rayon’s help and they become friends – almost an odd “couple” even though Woodroof makes it clear over and over again that he is not gay. One of my favorite parts of the movie is when the two of them are grocery shopping and they run into an old pal of Woodroof’s who won’t shake Rayon’s hand. Woodroof literally strong-arms his former friend into shaking hands with Rayon showing just how much the latter does to humanize the former in this movie.

Another aspect I find interesting is that in the seven years Woodroof fights for his life and the lives of others his biggest struggles are not having the ability to be sexually active (other than with the one female who walks into his organization and already has AIDS) and his extraordinary determination to damn the man. I also really enjoyed his friendship with Dr. Eve Saks (Jennifer Garner who sinks her teeth into a small role) and how she finds herself in the middle of a moral dilemma as she is torn between the hospital who employs her (and all the red tape and regulations that go with that responsibility) and the Dallas Buyers Club which is actually doing more to help her patients.

While some parts of this movie were hard to watch – Woodroof and Rayon literally ingest and shoot whatever it takes to keep themselves alive because, as Woodroof says, they are their own physicians – other parts feel almost victorious like when Woodroof, obviously close to death, takes his cause to the Supreme Court.

Clearly both actors deserved the awards they received for their gutsy, vulnerable and committed performances. I hope that we see more films like this in the future and next time I won’t wait so long to watch.