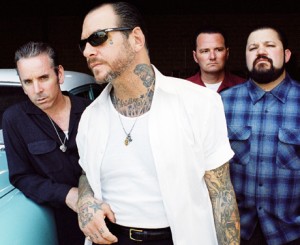 Although some people are appalled by the idea of recording someone else’s song, I appreciate it when an artist/band covers a song from another genre and makes it sound like a completely different but just as awesome track. The most recent example of cover perfection is California punk icon Social Distortion recording Creedence Clearwater Revival’s “Up Around the Bend.” Lead singer Mike Ness has maintained his voice brilliantly and the rest of the band does a great job putting a fresh coat of paint on an old classic.

Recorded as part of the soundtrack for the upcoming animated movie Free Birds which is slated for release on November 1, the disc will be released on October 29 through Relativity Music Group. Although it’s a little strange for a punk band to be contributing to a kid movie, the song is great and gets the band back on the music radar.

Formed in 1978 in Fullerton, California, Social Distortion currently consists of Mike Ness (lead vocals, lead guitar), Jonny Wickersham (rhythm guitar, backing vocals), Brent Harding (bass, backing vocals), and David Hidalgo, Jr. (drums). The band’s most popular album (certified gold) was their self-titled effort released in 1990 which included hit singles “Ball and Chain” and “Story of My Life,” along with another great cover – Johnny Cash’s “Ring of Fire.” Social Distortion is one of the best-selling punk rock bands in America with more than three million albums sold worldwide. The band is currently working on an eighth studio album, which they plan to release in 2014.

If you’re still not convinced that covers can be awesome here is a list of 10 genre-bending covers that will most definitely grab your attention:

Maybe Social D will release a covers album – could be a great idea for album number nine. I also hope they decide to go back on tour next year in support of their new album. I’ve seen their show before and I’d definitely go see it again.