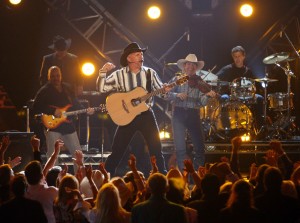 Is it me or is country music everywhere these days? A few examples:

-Centered around two female singers – one deemed country royalty and the other the current big thing – ABC’s Nashville is a huge hit and that is because the story lines are solid and they hired T-Bone Burnett to handle the music, making the show as awesome as it is authentic. Also, they hired actors who can actually sing and are musicians. There have only been two episodes and both have been comprehensive, real and intriguing with Nashville providing the backdrop instead of fake sets on a studio lot.

-Carrie Underwood was recently the subject of a new Behind the Music segment and although she got her start on American Idol she, like Kelly Clarkson who has done some crossover country music with Jason Aldean, makes you forget that she came from a reality television show. Why? Because their voices are so big and they are so talented that the music industry is just happy they got here. As of July 2012, Underwood had sold over 25 million singles and more than 15 million albums worldwide.

-Taylor Swift is on the cover of Rolling Stone this month marking the second time she’s graced the magazine’s cover in three years. She was on the cover in 2009 as well.

-Blake Shelton has gained so much popularity as a judge on The Voice it’s unbelievable. Even if you don’t like his music (most people do) you like him – he is attractive, funny and his wife is country superstar and all-around badass Miranda Lambert.

And for the grand finale: Country music legend (before country was cool and mainstream) Garth Brooks will be inducted into the Country Music Hall of Fame on Sunday. Although he retired from the music industry a decade ago he is only 50 years old and I could totally see him coming out with another album or going on tour again. He did agree to a three-year stint in Las Vegas that recently ended and he’s played charity concerts, including a nine-gig run following the Nashville flood in 2010.

In terms of numbers, Mr. “Friends In Low Places” is not only the most impressive country artist in music history, he is also one of the most impressive artists in general because he has sold more than 128 million albums. That’s more than anyone except the Beatles and Elvis Presley. Yep, you read that right.

Now that country music has more crossover artists that walk the line of country/pop (Underwood, Swift, Lady Antebellum) and country/rock (Aldean, Keith Urban, Darius Rucker) more people are listening, buying records and recognizing names. It’s not just the Tim McGraws, Gretchen Wilsons and Kenny Chesneys of the world anymore. Country musicians are in magazines, on commercials and guest starring on television shows and the genre continues to grow. I hope county music’s popularity continues and if they continue to put out quality music they will continue to rule radio – and every other entertainment outlet that exists.