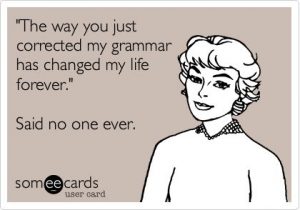 I recently read an intriguing article by author, editor, and entrepreneur Bill Murphy Jr. called 17 Grammar Mistakes You Really Need to Stop Correcting, Like Now. While Mr. Murphy made some interesting points about how annoying it can be when someone is constantly correcting other people’s grammar mistakes, I think parts of the article sends a conflicting message. Using proper grammar is important – especially in an age that is dominated by technological shortcuts like texting, Snapchat, and Twitter that devalue sentence structure and word choice.

That being said, Mr. Murphy does mention that being a teacher is a different story because part of the job description is correcting students’ grammar. As a teacher’s assistant and tutor for English and writing, I’m glad he made that distinction because I spend a lot of time and effort helping hard-working college kids with some of the rules and examples provided below.

Although Mr. Murphy provides 17 examples, in the interest of avoiding being the over corrector that needs to be curbed at times, I’m not going to talk about all of them. Instead I’ll focus on the five from his list that I think are most important to pay attention to no matter who you are or what you do for a living.

Examples: Brian is the lead singer who writes all of the songs for his band.

His band is the one that was nominated for a Grammy award.

“Fewer” is used when talking about things that can actually be counted.

Examples: Fewer dollars should be spent on cutting down trees.

Less time should be spent on cutting down trees.

As I write this post, Microsoft Word (which is by no means right all the time) is showing a red squiggly line under the word “irregardless” because it’s not a word. “Regardless” is a word but “irregardless” is not – no matter what you hear in conversation or what you read on social media.

In order to go further in college, each student most complete their core classes.

People use slang double negative phrases like “That won’t do you no good” and “Ain’t nobody got time for that” to reiterate a point or make a joke. Others use those phrases because it was part of the vernacular they heard growing up. But unless you’re writing dialog for a specific character, those phrases should be avoided and so should double negatives when describing someone or something.

Double negative example: That guy is not unattractive.

Instead of describing what he’s not, say what he is: That guy is fairly attractive.

Here are three grammar examples Mr. Murphy and I agree on:

One or two spaces after a period

Because the origin of the two spaces rule comes from the fact that antiquated typewriters required it for logistical reasons, I agree that it no longer matters. While nowadays one space is customary, using one space or two is not a big deal as long as the writer is consistent.

Also known as a serial comma, using the Oxford comma means including a comma after the second word (that falls before “and”) when listing three items/people.

With Oxford comma: My favorite bands are Led Zeppelin, Aerosmith, and Van Halen.

Without Oxford comma: My favorite bands are Led Zeppelin, Aerosmith and Van Halen.

I always tell my students that they can write either way but they need to be consistent.

This one was new to me! I had no idea there was a difference between “i.e.” (which I found out means “in other words”) and “e.g.” (which means “for example”). As far as I’m concerned, they are interchangeable and Mr. Murphy seems to agree.

Bottom line: Do your best to follow grammar rules. You’ll be glad you did!