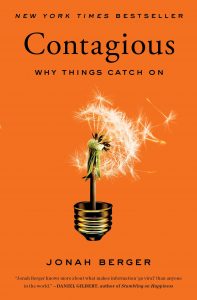 These days I prefer reading non-fiction books because they are real stories about real people and/or they teach me something new that is useful in my life and/or my business. Many years ago I read Malcolm Gladwell’s The Tipping Point: How Little Things Can Make a Big Difference which explained how simple social nuances contribute to our lives. Published in 2000, Gladwell’s book defined a tipping point as “the moment of critical mass, the threshold, the boiling point” which he describes as the reason why many seemingly small changes make the biggest differences. A journalist, author, and speaker, Gladwell is a staff writer for The New Yorker and has written five books, the most popular of which being The Tipping Point, Blink: The Power of Thinking Without Thinking (2005), and Outliers: The Story of Success (2008).

Although Gladwell is referenced in the book I’m reviewing, this blog isn’t about him – it’s about someone he’s inspired: Jonah Berger, the author of Contagious: Why Things Catch On. In addition to being an author, Berger is a Marketing professor at the prestigious Wharton School at the University of Pennsylvania. Like Gladwell, his interest in sociological tendencies and how they influence consumers, brands, and businesses has spawned a fascinating book about why people are drawn to certain commercials, brands, products, and taglines, and why others get ignored. By using examples that include a $100 cheesesteak, a bar that only takes reservations via a random payphone in a hot dog diner, and an advertising campaign for Dove soap, Berger demonstrates why certain ideas catch on (and why others don’t) and how to apply these concepts to successfully sell or promote a product, skill, business, or brand.

Even though my degree is in English, I took as many Sociology classes in college as I could because people, and more specifically why they do what they do, intrigues me. When I was a student, the University of Colorado at Boulder did not offer a minor in Sociology, but if that had been an option I would have definitely taken it because understanding how and why people think and behave really is the core of how our society works both socially and financially.

A few things I learned from Jonah Berger:

If you’re a fan of sociology, are interested in why certain ideas are popular and why others fail, or wonder about the reasons behind the success of seemingly simple business ideas, you’ll find this book captivating as well. Berger’s explanations are clear and concise and he uses carefully chosen examples that grab the reader’s attention. I hope his students at Wharton are getting as much out of his classes as I did from his book.