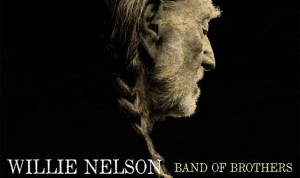 Willie Nelson has a number one album! His latest release, Band of Brothers, moved 37,000 copies during its first week, sending the record to the top of the Billboard Country charts. This is very exciting news for the 81-year-old singer as it marks his first chart-topping country album since 1986’s The Promiseland.

Any fan of Willie Nelson will love this album – there are so many fun, foot-tapping songs such as “Hard to Be an Outlaw” and “Crazy Like Me.” Even though Nelson has been on tour for over four decades, there is nothing worn and weary about his voice. It sounds great and like he’s been somewhere and knows a few things.

In addition to the Billboard Country charts, Band of Brothers debuted at number five on the Billboard 200 which measures America’s best-selling albums across all genres. Number five is the highest position Nelson has hit since 1982, when Always on My Mind peaked at number two for four weeks.

A vet in the world of outlaw country music, Nelson continues to be one of the most recognized artists in the genre. He was one of the original figures of outlaw country, a subgenre of country music that developed in the late 1960s as a reaction to the conservative restrictions of the Nashville sound. Nelson signed in 1964 with RCA Victor and joined the Grand Ole Opry the following year. In 1973, after signing with Atlantic Records, Nelson released Shotgun Willie and Phases and Stages. In 1975, he switched to Columbia Records where he recorded Red Headed Stranger.

In addition to his solo work, Nelson is part of the country super-group The Highwaymen, which also features Johnny Cash, Waylon Jennings and Kris Kristofferson. He has also acted in over 30 films, co-authored several books and has been involved in activism for the use of biofuels and the legalization of marijuana.

Nelson will spend most of the summer on the road and will kick off a two-week run with Alison Krauss and Jason Isbell on July 6. Here’s to you Willie – congrats on being back on top!